Eton Mess: The Old British Dessert That Only Takes 5 Minutes To Create

On a recent trip to Los Angeles, I was brought to SoHo House in West Hollywood, where my host had ordered a bowl of what looked like whipped cream and strawberries. Hidden inside the mixture, however, were chunks of fresh meringue. What is this? It is Eton Mess.

There is one thing left to say - Eton Mess. Australians may call it a f%^*ed-up #pavlova - it was bloody sensational #dessert #qflovesca #etonmess #makeitdelicious hey @kerrie_mccallum 😘🇺🇸🌴💃🏻

The dessert is a traditional British one, which was originally served at Eton College in the 1930s. There were, and still are, variations on the quick dish—in the beginning it was made of either strawberries or bananas, and mixed with ice cream or cream (according to Wikipedia, Meringue was a later addition). You can, of course, use whichever fruit is in season—when I made my own this weekend I used blueberries. Trust me, they're in there somewhere: 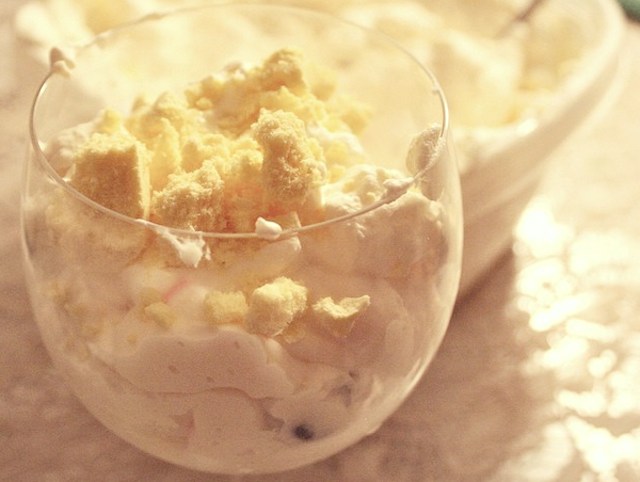 You'll want to mix the meringue in, I just left it on top for photo purposes. (Jen Carlson/Gothamist)

This thing takes about 5 minutes to make, and you would be doing yourself a disservice if you didn't try it out.

Here we turn to Nigella Lawson, who instructs, "Whip the cream in a large bowl until thick but still soft. Roughly crumble in the meringues—you will need chunks for texture as well as a little fine dust." From there, add whatever fruit you are using.

A note, from experience: only add the meringues in a little bit before you plan to dig in, if they're left too long (say, overnight) they will disintegrate and become part of the cream, and you don't want that.

The SoHo House in New York also serves this dish, but they have yet to reply to our request for their recipe. Probably because we don't know the secret handshake.

#dessert
#eton mess
#recipe
#original
Do you know the scoop? Comment below or Send us a Tip