StuyTown staple Ess-a-Bagel finally returned over Labor Day weekend, with a soft opening on Sunday and a grand opening on Tuesday. The beloved bagel business was forced out of its longtime home at 21st Street and 1st Avenue earlier this year by rising rents and a less-than-accommodating landlord. (The old space is now, ironically, inhabited by a shiny new bagel shop, Tal Bagels.)

Many things have stayed the same—namely the bagels. They are fresh and hot, right out of the oven. There is still way too much cream cheese, but maybe that's enough to justify the price tag ($3.75). As at the Midtown location, there are two distinct lines—one for just bagels and one for everything else.

But much has also changed. Adding fuel to the Great Toasted Bagel Debate, Ess-A-Bagel has finally caved and is now openly offering to toast bagels. I eyed the conveyer-belt industrial toaster behind the counter warily as my everything bagel was tossed inside. Toasting was never offered at 21st Street, and any such inquiry was angrily shot down. There was even a sign proclaiming "No Toasting." Now, employees ask happily if you would like that bagel toasted.

I ordered my usual, an everything bagel with vegetable cream cheese, except this time I cringed as I uttered the word "toasted." Toasting strikes me as a pitiful attempt to resuscitate an old bagel, and Ess-a supposedly prides itself on its bagels being fresh out of the oven. Which they are! So why toast? Toasting also makes bagels hard and chewy quickly, and the excessive heat makes the cream cheese runny.

Yet I was pleasantly surprised. It was steaming when I unwrapped it, as appetizing as it ever was, with or without the toasting. The reality is that toasting didn't really change the bagel as much as it made it slightly warmer. It was still soft, and far from flaky or crunchy. Passable, if only because it was not full-out toasted.

"We now have the space for it," an employee shrugged, when asked what prompted the complete 180 degree policy shift, "and a lot of people ask for it." Who knows who these people are? 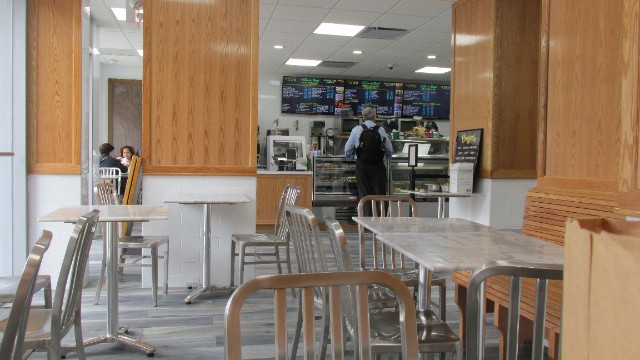 Most striking is the store's major facelift. The old Ess-a was cramped and a little grimy, with sparse seating and no bathroom. The new space is bright and open thanks to the large street-facing windows that look out onto First Avenue. The space is about three times as large as before, with plenty of seating. Any crumbs that fell to the floor were quickly swept up. The white subway tile walls and digital menus give the location a distinctly clean and modern feel. There is even a window where you can watch the bagels being put into the oven.

Service has changed, too—though not entirely for the better. The old servers were grouchy, but I appreciated their no-frills attitude and quick service. Though we can probably chalk it up to opening-day hiccups, the service was slow and inefficient.

"There are still a lot of things to work out," an employee noted, after informing a returning customer that, no, they still didn't have the chocolate-dipped almond horns or cakes in stock, as they hadn't yet been ordered.

In the wake of the announcement in January that Ess-a would be indefinitely dislocated, long-time customers and bagel lovers had started writing and carving testimonials into the very walls of the shop. Now, one of these walls is showcased under gleaming glass, a relic from the past.