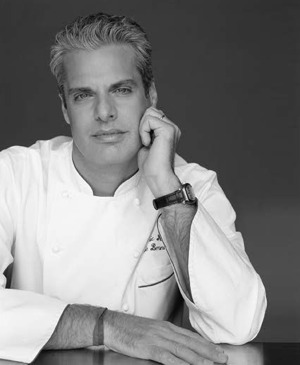 In 1994, Eric Ripert became the executive chef of Le Bernardin after chef-owner Gilbert Le Coze died of a sudden heart attack. The following year, Ripert was only 29 years old when the restaurant was re-reviewed and kept its four-star rating from the New York Times. Le Bernardin has had a total of four four-star New York Times reviews since its New York opening in 1986, and has consistently been awarded a top rating of three Michelin stars since guide inspectors first set up shop here in 2005.

Outside the kitchen, Ripert is instantly recognizable to viewers as a Top Chef guest judge. He also writes about food for Gourmet and maintains an improbably quirky, toaster oven oriented cooking site called Avec Eric. On this site Ripert has introduced a mass cooking experiment of sorts called Dinner Social. Its central idea is not unlike a “one city, one book” program: as a vast, disconnected network, participants cook a greenmarket dinner menu (devised by Ripert) for friends, then share kitchen stories and photos on the site.

Ripert wrote On The Line with Christine Muhlke, which serves as a detailed day in the life of the Le Bernardin kitchen. Tomorrow night at the Columbus Circle Borders, Ripert joins Urban Italian chef-author Andrew Carmellini in conversation with Josh Ozersky. We spoke with Ripert last Thursday about Top Chef, toaster oven magic, and why the chef sprayed Champagne on salmon in Le Bernardin’s private dining room.

First off, could you talk about Avec Eric, this site that features videos of you cooking all kinds of stuff with a toaster oven? As much as I like to take all the credit for cooking with a toaster oven, I must give it to my wife. She's the one who started to cook with it for our five year old. One day I came home, and we were late to go somewhere and she told me she was going to cook a piece of halibut. I said, Are you crazy? She said, “No, it'll take five minutes.” And she did it. I was like, oh my god this is absolutely fantastic. So the inspiration came from someone who is not a professional chef, someone who deals with the realities of cooking at home, for a small amount of people. Also, it’s super efficient. Like so many New Yorkers, I use my oven at home for pot and pan storage. Each time I cook I have to empty it out then preheat the oven, and it's a process. Then if you cook on top of the stove it's another experience because you have to clean it each time. With the toaster oven you take a small tray, line it with aluminum foil and then you're done in five minutes. It's a green idea, it's economical, and it's clean. There are a lot of advantages. All those things inspire me to use the toaster oven. I don't sell them or endorse them. Actually, on the site I think we do sell them, but I'm not the toaster oven guy, you know. I'm not endorsing a particular brand, and there’s no financial advantage in promoting them.

I once worked at a restaurant where we used a hot dog heater to gently cook scallops. Do you have anything like that in the Bernardin kitchen? [laughs] No, we don't. We have fairly classic, basic equipment.

We used to cook things like halibut between parchment, stuff like that. I'm sure that works. As a professional chef in restaurant, obviously I don't use a toaster oven. I'm classic in my approach in terms of using heat, domesticating the heat, and applying it to cooking.

Fair enough. I'm surprised they make you sign that. No big deal, everyone gets the news within three months anyway.

What's your relationship like with Food TV and chefs on television? I don't watch too much of it because I'm here [at Le Bernardin] during the day and when I get home I've done my cooking for the day. I’ll watch Charlie Rose or something like that. I'm not necessarily watching cooking shows, but I have nothing against them. I like the fact that television has brought tremendous attention to the cooking world. The more interest, the better.

You were a guest judge on Top Chef in LA, Puerto Rico, and Aspen. Have fromer Top Chef contestants staged here? Two contestants did. One won the prize and another, Marcel, just wanted to come to work. The surprising part of it is that I found Marcel genuine, cool, and friendly but on the show he was portrayed as the intellectual villain. I think until you see yourself on TV you don't know how you can be perceived.

So no camera crews in the Le Bernardin kitchen? I don't want cameras following me; I don't need that. But when you want to promote something or discuss something you can do it in a very efficient way on TV without compromising your principles.

I’ve read about your interest in Buddhism and your visit to Dharamsala. Can you tell me how that developed? It's a funny story that started in 1989, the day I left France. I had ten Francs in my pocket and I was at Charles de Gaulle Airport liquidating my money. I was thinking of buying a Playboy and picked it up, ready to buy it. But then I saw a book on Buddhism. I don't know why I was attracted to this book - I didn't know anything about Buddhism! After about ten minutes of debating, I finally ended up with the book in my hands, and that was the beginning of my interest. It has been, obviously, a spiritual experience. I like the fact that it's not a dogmatic philosophy of life. It inspires me and I try to apply it as much I can in my life - professional and private.

Are you going back anytime to Dharamsala to visit the Tibetan community in exile anytime soon? My next trip will probably be to Gaya, the city where Budhha was enlightened under the tree. There's a big party every year, for peace, hosted there. I'm on the board of an organization based in San Francisco called TAP, Tibetan Aid Project. Basically we raise money to print books for monasteries and for refugees who don't have access to the books because they've either been destroyed by the Chinese government, or x-y-z other reasons. So that will be my next visit I hope - I'd love to go as a volunteer to distribute the books.

One time I had the opportunity to volunteer while the Dalai Lama was in town and ended up helping the monks get their luggage to JFK. Hey, I would gladly, very happily volunteer to help the monks with their luggage, but I don't want anyone to think I'm a freak.

On Gourmet you wrote about your moment of momo inspiration. Everything inspires my cooking. Inspiration comes from what surrounds me and I think that's a natural part of the process for any chef. Wherever I am if I taste something, ultimately it ends up being a part of my creative process. Le Bernardin benefits from all my experiences.

Are you planning any other restaurant projects? I have other projects – in the Cayman Islands and Washington DC - but I'm picky. I'm also clear about the fact that I want to be spending most of my time at Le Bernardin. My top priority is to be here, and to create here.

In your book A Return to Cooking, there’s this one passage about your intense experience working for Joël Robuchon at Jamin when you were younger: “You go for dinner Sunday night, and you are too wound up to even see it. And then you go to bed and you don’t sleep at night. You’re making all the setups— ‘Tomorrow I’m going to start this and I’m going to start that, and I hope I’m going to get the fish early and I’m going to start that.’ And you wake up— and you’re exhausted… Many times I thought I’d take the car to the airport and get out of there.” [laughs] Those experiences were a tremendous inspiration for me to become civilized and to inspire joy in my team. I want my cooks to be happy; I don't want them to be stressed or intimidated or scared. I want the cooks at Le Bernardin to have a positive experience. However, in between my theory of peace and happiness and the reality of 8 o clock at night is the war, there's an adjustment to make. I don't want my cooks to feel what I felt when I was working with Mr. Robuchon— who I consider a genius and who I thank for my success today. Most of it is because of him.

Do you see Mr. Robuchon when he comes to town? Yes. I was with him in September, and we cooked together in LA. I see him about two or three times a year.

Do you have a favorite cut of meat? I just ate a porterhouse for lunch across the street for lunch and it was very good. I love it.

I imagine you don't go out after work a lot. Not too much. Maybe twice a week – my two days off. One place I go almost every week to the despair of the family is Balthazar. I go back again and again and always pick from the shellfish platter: oysters, clams, crab or shrimp. And steak tartare. With fries!

What's the deal with your new book? It’s called On The Line, and it's basically a documentary of the life of Le Bernardin. It's got about 50 recipes but it's not so much a recipe book. It's more of a backstage look at what happens here and what happened in the past.

Kind of like a Day at elBulli but smaller? Much smaller. But it is very behind-the-scenes. It's funny because now Grant [Achatz] has a book that's a little bit of this and so does Ferran [Adrià] but I swear we did not communicate it.

[Ripert opens the book to a page depicting what looks like a salmon wriggling in sea spray, or something] The photography is really cool. I'm very passionate about it. These are fish we bought dead, obviously, for Le Bernardin. So to give them life we sprayed them with Champagne and they look like they're alive. We wanted them to look artistic.

Did you have a part in this? I was spraying the Champagne upstairs in the private dining room.

Do you have an 'only in New York' story? To tell you the truth, New York is a condensed version of the food world. What happens here, happens to me everywhere.