A couple of weeks ago, on the outskirts of the Bushwick Collective Block Party, we spotted a crew of kids selling ice-cold beverages from one of those newfangled DSNY Organics Recycling bins.

And it makes sense! Those street collection bins are sturdy as hell, have wheels for easy transport and there's no drainage vents on the bottom, so no leakage. And they have that tight clamp-on seal up top, to keep all of that sweet, sweet coolness in. Nice moves, young entrepreneurs!

At first we feared that the enterprising lads had maybe obtained their "storefront" through shady means, but they were quick to reassure that everything was on the up and up. "No no no no no no no" they said. "We got it from QUEENS!" 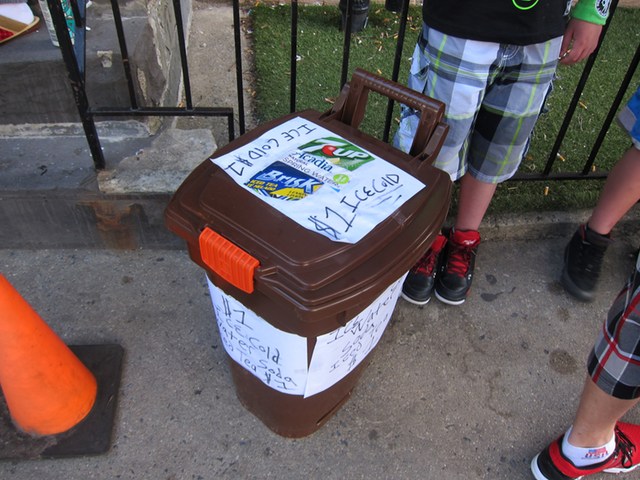 So maybe now you're thinking of using your Organic Recycling bin to haul your sodas **cough** beers to the park or the beach this summer? We contacted the DSNY about the issue, and while their spokesperson was quick to point out that "the purpose of the organic bins is for residents in the pilot areas to contain their organics before the Department's weekly collection", she also admitted that "once Sanitation delivers a bin, it is the property of the owner."

#bushwick
#composting
#dsny
#original
Do you know the scoop? Comment below or Send us a Tip