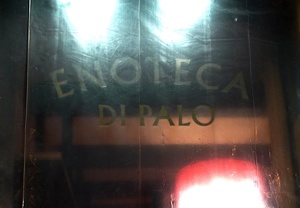 The plastic over the windows is coming down, and the construction equipment is being removed: Enoteca Di Palo, a new retail wine shop located in the space adjacent to Grand Street’s famous Di Palo Fine Foods, will open this weekend, according to Lou DiPalo. The focus will be on Italian wines. “There will be wines from Italy’s 20 different regions,” said Lou DiPalo yesterday.

Enoteca Di Palo will also focus on specialty liquors and small batch fortified wines, Marsala, and even Italian vodka. Lou said his son Sam, who has been studying Italian food and wine for the last 4 years, will run the wine store. Eventually, small bites and cheese from next door will be offered as pairings at in-store tastings, and a cellar cantina will open later for full tastings and Italian wine seminars. The store’s wood and wire shelving was custom built in Italy, and the plan is to have waiting customers who have taken a number at DiPalo Fine Foods browse in the wine shop at a more relaxed clip. Lou DiPalo told us earlier this year that while “It’s not uncommon to have a 40-minute wait,” at the Little Italy institution, “during the holidays it could be up to 4 hours.” Go go magic Barolo!