Bolstered by the Instagram success of the Artisanal Roach Bombs ($15.99) and Dickson's Farms Condoms ($24.97) at gentrification-threatened Jesse's Deli in Boerum Hill, a group of Brooklyn activists has taken their overpricing concept on the road, to a block of small Latino businesses in Washington Heights on Broadway.

Coltown Properties bought up the entire block between 162nd and 163rd Streets for $31 million back in 2012, and declined to renew commercial leases for all 12 small businesses located there—primarily restaurants and markets. Seven of the businesses were dealt eviction notices in March, and all but two of them—a 600-square-foot Dominican Restaurant called Punta Cana, and the adjacent market, Frutera El Buen Camino—have since left.

"We came up with the idea right before the 4th of July weekend, when somebody brought the Washington Heights evictions to our attention," said organizer Doug Cameron. "We wanted to act quickly, so we went up to visit the owners of Punta Cana... and spent our Fourth of July in Washington Heights putting up the signs."

"In Boerum Hill, there was frustration over rent increases, but nothing like what we saw in Washington Heights," he added. "We met people who were in the process of being evicted, who were really scared because they had no idea where they were going to go."

The Village Voice reports that all of the businesses on the block were given the option of paying higher rent—in Punta Cana's case, $9,000 a month, up from $5,000. When the diner's owner, 80-year-old Angel Santos, declined the offer, he was given a one month extension, and then another, and then another. Susan Chase, an attorney for Legal Aid Society, stresses that there is little hope for the business, since New York doesn't have a law that protects commercial renters from un-justified lease-breaking. 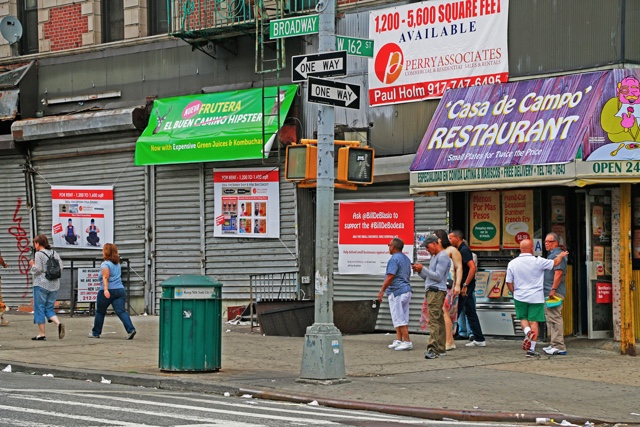 For this week's 'Gentrification in Progress' sale, Punta Cana has been temporarily renamed Casa de Campo, after an exclusive gated community in the Dominican Republic. "Many of the locals in Washington Heights didn’t have the same artisanal language as reference point [as the Boerum Hill crowd did]," said Cameron. "So we changed the main reference point to something that all Dominicans understand: the elite gated community of Casa de Campo."

A new illustrated awning over the diner's entrance depicts a man with a monocle eating off of a tiny golden plate with golden utensils. Below, window posters advertise Menos Por Mas Pesos ("small plates for twice the price"), including a Hand-Cut Seasonal Summer French Fry ($8.99), and Rustic Baby Octopus Tentacle ($14.99).

Tommy Noonan, one of the project's co-creators, likes the contrast between the big plates of rice, chicken, and plantains that the 40-year-old, 24-hour diner is known for, and the small plates advertised in the windows. But Punta Cana isn't going to start pushing single french fries any time soon. "This is mainly an 'advertising-forward' campaign, that shows what this place could be like in the future," Noonan said.

"Washington Heights has far fewer gentrifiers willing to pay these higher prices than Boerum Hill, where many people were actually willing to pay more," added Cameron. "So people joke about it, but nobody has taken the prices too seriously."

Frutera El Buen Camino is not in danger of eviction, and declined to participate in the Gentrification in Progress sale. Still, on the awning of a vacant storefront adjacent to the market, a new lime-green sign reads "Frutera El Buen Hipster: Now with Expensive Green Juices and Kombuchas." Below, posters advertise Locally Skimmed Pond Scum Smoothies ($14.99), and Fresh-Mowed Wheat Grass Cold Press ($7.99). "We thought that the juxtaposition would make our point," Cameron said.

In addition to supporting Punta Cana, Cameron and Noonan aim to raise awareness about the Small Business Jobs Survival Act (SBJSA)—City Council legislation, currently lacking mayoral endorsement, that would insure certain protections for commercial business tenants, including a minimum 10-year lease for commercial units. To do so, they've branded their campaign Bill de Bodega, and hung signage along the block that urges passersby to use their new hashtag: "Tell @BillDeBlasio to support the #BillDeBodega."

So far, "We haven't had any feedback from de Blasio," Noonan admits. "We're still hoping that people will respond to it a little more."