Now that we're comfortably settled into fall, it's time to start thinking about every lager lover's favorite time of the year: Oktoberfest. The Germans got a head start on us, beginning their celebration as they always do in late September, and there are some impressive stats coming out of the fatherland. Already 3.6 million visitors have chugged as many liters of beer in the first week of the Fest, an almost six percent rise from this time last year. That much alcohol consumption has some obvious consequences: 445 Bierleichen or "beer corpses" have been reported, presumably slipping into an alcoholic-food coma after devouring 60 oxen, 26 calves and a whole lot of fried chicken in a booze-fuled munchie mania.

But this is America, people, and if we do anything right it's overconsumption of food and alcohol. To that end, various iterations of Oktoberfest are popping up all over the city, daring you to rise to the occasion and consume more beer and brats than our German counterparts. So give your Stein a shine and head on over to one of these parties:

Every Tuesday and Wednesday through November 14th, iAdventure.com is sponsoring authentic German Oktoberfest Beer Dinners at both locations of Little Town restaurant. An $80 tickets gets you a "German inspired platter" for two and four Oktoberfest themed beers to split. Organizers promise a "real taste of Munich" right here in the States.

This Saturday in Brooklyn, the folks at Radegast Hall & Biergarten have put together an afternoon of beer drinking and pig roasting. Swing by between 2 p.m. and 9 p.m. to sample the swine, listen to oompah bands Zlatne Uste and the Kavala Brass Band or even show off your beer biceps and see how long you can hold up a one-liter stein of beer in the mug holding competition. 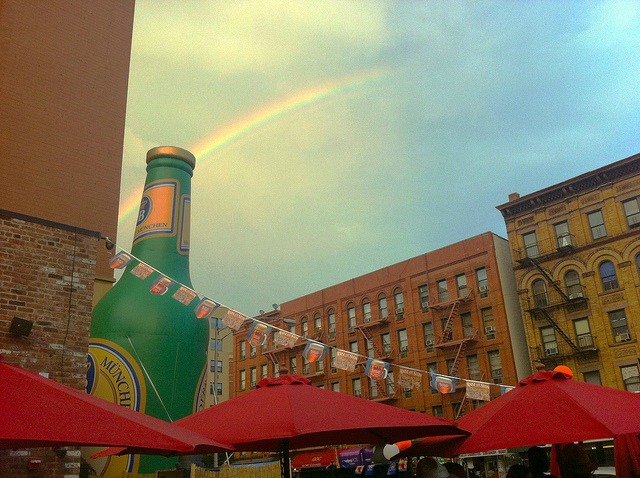 OktoberfestNYC has been taking over 1 Penn Plaza since September and you have until this Sunday to experience the "largest celebration in the city" for yourself. And large it is: 10,000 square feet of festival space including the plaza, a tented beer garden and the roof deck, patio and inside bars at nearby Local West. Throughout the venue are German beers like St. Pauli Girl and Lowenbrau plus German folk bands and fashion shows each night. Weekends, swing through to watch the football games and get a good food base going at the Hoppelpoppel brunches. Best of all, there's no cover charge, so you'll have extra pocket change to pay for shots off the Jagermeister shot skis. 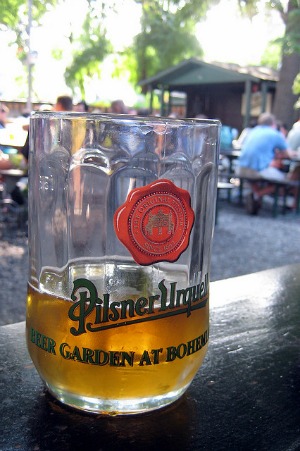 Queens stalwart Bohemian Hall Beer Garden hosts beer tastings each night through Sunday of some big names in German beer (and Samuel Adams). Sample Krusovice, Spaten and others nightly from 6 to 8 p.m. weeknights, 3 to 6 p.m Saturay and 5 to 9 p.m. Sunday. Live music, DJs and even karaoke provide entertainment while you get your beer on.

Down in the East Village, Zum Schneider has been putting on its own version Oktoberfest with nightly beer specials and performances by Mösl Franzi and the JaJaJa's. Nightly at 5 p.m. (1 p.m. on the weekends) swing by for $16 liters of imported Vacarian beers like Hofbrau Traunstein Festbier, Schneilder Wiesn and Edelweisse. Snack on Wiesn Hendl (broiled chicken), giant Wiesn Brezn (pretzels) and Lebkuchen hearts (cookies) for the full experience.

While the beer might get most of the attention, Oktoberfest always means lots of delicious Deutsche delights to snack on. Bierhaus NYC hosts the first officially sanctioned Oktoberfest eating championship, where you can watch the pros devour as many bratwurst as they can to nab winnings from the $1,500 prize pool. Watch the action starting at 3 p.m. while you sip Hofbrau Oktoberfest and eat a brat or two of your own.

The smell of flowers will be briefly overpowered by the smell of grilled sausage when Sycamore in Flatbush throws an Oktoberfest-themed welcome party Saturday the 27th for their new manager Matt Barclay, formerly of Bierkraft. The aforementioned sausages will be on hand as well as important and domestic Oktoberfest beers to sample. According to the bar, Barclay has located some "super-rare farmhouse lagers straight from Bavaria," arriving in 5 gallon gravity kegs, which we're told won't last long so plan to arrive when the party starts at 2 p.m. so you don't miss out. 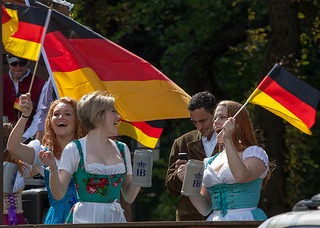 If escaping the city to get your drink on appeals to you, why not take a cruise along the Hudson to Bear Mountain. Each Saturday for the rest of the month, the Seastreak Ferry departs from Pier 11 to carry you away for a day of drinking, eating and leaf peeping in the NY State Park. When you arrive, enjoy the foliage on the 1 mile paved nature walk to the festival site then sample German food and beers, listen to a polka band or two and just revel what it feels like to drink surrounded by so much nature. Entrance to the festival is free but the just over an hour ferry ride will set you back $59. Check out the full entertainment schedule here [pdf].

Finally, if you just want to go all out, head over to La Venue for DAS Best Oktoberfest, an all-you-care-to-drink style beer extravaganza. In their words: "It's das best day of beer sippin', sausage tastin', music listenin', lederhosen wearin' on this side of the Atlantic." Sample the 150 international and craft beers—plus some wines and schnapps—plus an ala carte menu from the brat concessionaires and a soundtrack of Oompah and polka bands to set the tone. This all goes down over two sessions on Saturday, October 20th; buy your $76 dollar ticket in advance or pay $85 at the door.

#beer
#germany
#octoberfest
#oktoberfest
#original
Do you know the scoop? Comment below or Send us a Tip