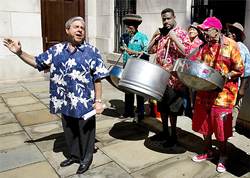 After many false starts, Trader Joe's announced this week that the grocery store chain would be finally arriving in Brooklyn. The news was heralded by Brooklyn Beep Marty Markowitz, who was decked out in one of the store's highly visible Hawaiian print shirts and leading a steel drum band at Court St. and Atlantic Ave. The Brooklyn Paper reports that while the grocer will soon move into the landmark Independence Savings Bank building at Court and Atlantic, Brooklynites will be required to trek to Manhattan if they want their "Two-Buck Chuck" wine.

"Two-Buck Chuck" is what shoppers affectionately (or derisively) call the Charles Shaw wine that is stocked exclusively at Trader Joe's. While some may sniff at the discount brand, the winery's chardonnay was recently awarded Best California Chardonnay at the California State Fair Commercial Wine Competition. So why will Trader Joe's wine fans have to travel to 14th St. in Manhattan to get their wine? New York State has a restriction on wine sales in grocery stores. The Trader Joe's on 14th St. near Union Square has a separate and distinct, albeit adjacent location, where it sells its wine. The downtown Brooklyn store won't have the same.

Things are looking up for Brooklyn shoppers. The article in the Brooklyn Paper also noted that the new Whole Foods on Houston St. in Manhattan now includes the area from Williamsburg to the southern corner of Park Slope in its delivery zone. Red Hook is excluded, perhaps due to the new installation of the waterfront Fairway. Speaking of Whole Foods, that chain's CEO finds himself at the crossroads of loving his company and technology with bizarre results and an FTC investigation.

Libertarian vegan John Mackey, who is a co-founder of Whole Foods, finds himself at the center of a somewhat bizarre situation. The New York Times reports that Mackey was identifying himself as "Rahodeb" as he posted at a Yahoo! Finance message board for years (Mackey's wife's name is Deborah).

The Wall Street Journal broke the story, noting the allegations surfaced in court filings by FTC lawyers who are attempting to block Whole Foods' acquisition of Wild Oats Markets, feeling that it would limit competition among organic groceries. Mackey, who wrote at least 1,100 posts, didn't just limit his pseudonymous comments to talking business (or smack about competitors), however. He occasionally chimed in with flattering things to say about himself: "I like Mackey’s haircut. I think he looks cute!” the CEO wrote in April of 2000.

(Photo of Marty Markowitz, by Craig Dilger for The Brooklyn Paper)