Eggslut Sells Out Of Breakfast Sandwiches In Under Two Hours That's all, folks! New York City's first Eggslut—a temporary breakfast counter that specializes in crazy-good egg sandwiches—has officially sold out of its offerings less than two hours after opening. Well, we were warned.

Eggslut is the star attraction at SoHo's new Chefs Club Counter, which officially opened to the public today. Minutes before Chefs Club Counter's 7:45 a.m. opening time, 20 people were lined up in the rain along Lafayette. Dressed in waterproof boots and clutching umbrellas, the crowd waited patiently to order, eat, and Instagram.

Robynn Scelzo was first in line, and had been waiting nearly an hour—since 6:45 a.m. "My daughter made me come here—she wants four of them," Scelzo said. "I just do these things because I'm the mom. She's 20, she's a foodie, she has her own food blog and does food studies at NYU." 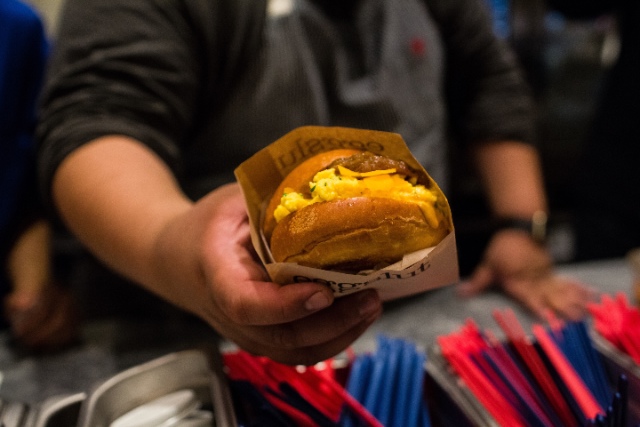 Four spots back from the door, Queens resident Sally Wong also had social media plans for her first Eggslut experience. "I've never tried it, I've never been to Cali, which is why I'm really excited for it. I love food, and there's a million and one pictures of Eggslut over there. I have my DSLR ready and I'm going to hopefully get a good picture for Instagram—but I'm also excited to taste it!" Wong, 26, said.

"I already told my manager that I might be late today, but I told her I'd bring her a sandwich."

Photogenic appeal is a big factor in Eggslut's popularity, but a restaurant cannot thrive on hashtags alone. Offerings at this new location are delicious, with the SoHo Salmon the obvious highlight. It's served on an Eric Kayser milk bun with smoked salmon dressed in a tangy fromage blanc sauce with pickled mustard seed, relish, onions and havarti cheese. It's $12, but before you slip into a sticker-shock coma, remember that even classic New York joints are charging double-digits for salmon on bread.

As Eggslut NYC's first complete sandwiches came off the line and into the hands of happy customers just before 8 a.m., most rushed to a seat to snap a quick photo (or stage a meticulously-composed tableau) and then dig in.

"I'm impressed with the first bite, I knew it was going to be good," Jason Garcia said as he held the first NYC sandwich sold, a scrambled eggs, chives, cheddar, caramelized onions and sriracha mayo mash-up dubbed the Fairfax. "I waited in line for an hour in the rain, but it was totally worth it. I'd do it again. I'm going to L.A. next month, and this was on my list. Now that I've had it here in New York, I guess I shouldn't go to L.A. anymore!"