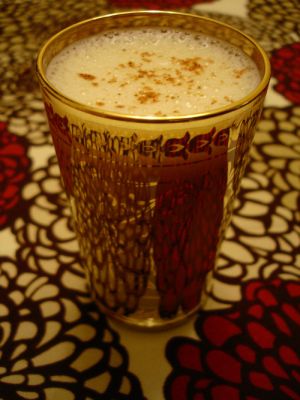 December is here, and the responsible citizens behind National Drunk and Drugged Driving (3D) Prevention Month have their work cut out for them, because this month is also National Egg Nog Month. On Monday night the fabulous folks at Mount Gay Rum (no comments, please) will be kicking off the month-long nogathon with an eggsellent event at the swank World Bar, former home of the world’s most expensive cocktail, located in the Trump World Tower. (845 United Nations Plaza at 47th Street.)

The World Bar will be serving a special fancy Egg Nog Martini made with the Mount Gay Rum, which claims to be the oldest rum on earth. For every person who orders the drink through the end of December, Mount Gay will donate a dozen eggs to City Harvest, the New York organization that intercepts food bound for restaurant dumpsters and delivers it to the needy. And the martini, which is the work of “acclaimed mixologist” Jonathan Pogash, is the same cocktail that was served at the premiere of Vince Vaughn’s FRED CLAUS, something the Mount Gay press release seems oddly proud of.

Wouldn’t be caught dead mingling with the stuffed shirts at Trump World Tower? Don’t just settle for a quart of nog at home – cast off the yolk of commercial eggnog and concoct your own. Though keep in mind that according to this recipe you’ll need three weeks lead time to let it age. Now, it may occur to you that leaving a mixture of eggs and milk sitting in your fridge for a few weeks would spell salmonella, but that’s where alcohol steps in yet again as a solution to life’s problems. Sam Beattie, a food scientist at Iowa State University tells CHOW that the bourbon called for in the recipe has a high enough alcohol content to kill potential bacteria. So don’t be shy with the Maker’s, it’s for your health.