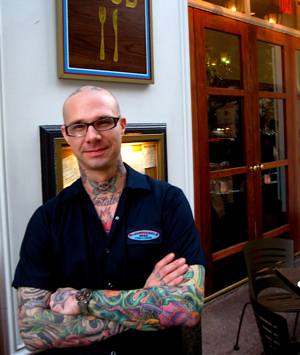 Chef Ed Witt is a veteran of several acclaimed kitchens. He was part of Jardinière’s opening team, was also there for restaurant Daniel’s move to 65th Street, and he helped open Nicole’s at Nicole Fahri, which garnered two stars from the Times in 1999. Witt was executive chef of Varietal, the Chelsea wine bar/seasonal American number that ultimately closed in June of last year after a one star Bruni bedazzler, a few kitchen shakeups, and the general knell that sounds for an empty, Jetsons-style restaurant at dinnertime.

Witt has moved on and is now the chef of Bloomingdale Road, located on the Upper West Side in the former Aix space, where he cooks eclectic New American food. For instance, Witt’s Lamb Julep riffs on both the traditional mint jelly served with leg of lamb and the archetypal julep cocktail. He also serves ham steeped in Coca Cola served with pickled onions and coarse mustard. Witt considers California chefs Richard Reddington and Traci Des Jardins to be his mentors. He has a lot of tattoos and wears a custom modified dishwasher shirt in place of a more traditional chef’s jacket. Witt also has two poodles, and is apparently single. Here he talks about his influences.

When did you start cooking? Back in high school. I used to play football and took home economics so I could eat when I was lifting weights— I had the two classes back to back, and I actually ended up getting a home economics award. I went to the University of Maryland to major in electrical engineering, mechanical engineering, and physical therapy, and was working at a restaurant in College Park that I ended up pretty much running. That's how it evolved. I went to Occidental Grill in DC and from there went to the CIA. I did my externship in at Rubicon San Francisco and got hired within a month, so I never went back to school.Instead I opened Jardinière with Traci [Des Jardins], and Mc Squared with Yoshi Kojima. Then I moved to New York and did the reopening with Daniel when they moved to 65th street. I opened Nicole's in the Nicole Farhi store with Anne Wayte. I ended up at the River Café in Brooklyn with Brad Steelman and was there for about a year and a half. I was at Il Buco for a year and a half, and after Varietal, I opened a place on Long Island, and here I am at Bloomingdale Road.

How would you describe this food compared to Varietal's food? What we’re doing here is less conceptual, less "ego food." It's more about what fits into the neighborhood. We took a 200 seat space and – you can't please everyone with the food at Varietal and Il Buco, for example– we took familiar dishes but put a twist on them. It's upscale comfort or upscale tavern, whatever you want to call it. We have a chef’s table here, and in a couple of weeks the chef's table will become more along the lines of what I did at Buco, a cool five course, not a straightforward five course. So one course might be a shared leg of lamb carved at the table. Stuff like that. More interactive, not so formal, but still a tasting menu. I did the wine list here so I'll probably do some nice pairings for the chef's table.

Have you had any success with the Time Out singles thing you did? A little bit. Little bit. I keep getting messages and a couple of people have been stopping by the restaurant. I actually saw one of the girls three times already.

Wow. Anybody creepy? I didn't respond to any of the creepy people.

So you did have some creepy people? I actually thought I'd get more responses that I did. But I got a lot of quality.

I heard Anne Burrell hasn't gotten too many "real" responses from that article. I'm sure. I heard it's a lot different for girls. I was talking to someone who did something similar a few months ago and she got a response from someone in prison. I think girls can be persistent but guys can be more creepy. I've been stalked on Facebook and Myspace a bit, though, because of it.

Like chef groupies? Like messages that say, "Oh I saw you at such and such a place and now I want to be your friend."

That's a bit creepy. It's easy enough to click the email with the article to find me on Facebook.

Pick a dish on the menu and walk me through it. There's the Lamb Julep [Roasted leg, bourbon ribs, green beans, popcorn,and mint] which will be on for a little while. Basically it plays on the flavors of a mint julep, so bourbon and mint. There’s pan-roasted leg, bourbon-braised ribs, mint and lemon gel, popcorn. The popcorn is on the plate because bourbon has to be made with a certain percentage of corn.

How do you make the gel? We’ll take simple syrup and puree it briefly with mint. Then I add a food starch to it.

You're not known as a chef who cooks with chemicals. Some of them are useful, though people tend to go over the top. With the mint gel it really makes sense– the starch keeps it fresher and brighter and you don't have to cook it.

With a dish like the julep, even though it's not experimental there's a clear, conceptual element. What's your approach to writing a menu? The whole idea is to make something that's approachable. This is trying to make the most out of the space, rather than what I think I can cook. I still live in the Lower East Side, but I'm getting used to the Upper West Side mentality. I'm trying to do stuff that's approachable and well done.

Do customers flinch when they see your tattoos and stuff when they see you in the open kitchen? I don't think so. I stand here all the time. I think it was worse when I was on Long Island than here.

Did you have a hand in the design of your chef shirt? It's like a dishwasher shirt, almost. I've always liked them and they're a bit non-traditional. I've broken a few rules here and there.

Do you have any nuggets of advice for young cooks? I've seen a big change over the years: everyone wants too much, too quick. And sure, you can cash in really early, but then you get stuck in middle management in this business. So I'd say, stay a cook for as long as you can. Otherwise you'll be doing paperwork and you can't go back.

Where do you go to eat when you get the night off? That rarely happens, but there are a few places. I like Dell’Anima, and they're both open pretty late for food. I made it to Elettaria before they closed the other night and it's great stuff. I think Belcourt is underrated. The Tasting Room used to be my favorite spot in the city before it closed.

What's your strangest, only in New York story? There was a high profile brawl at Il Buco once, ten fashion and film people in the middle of the dining room, a full-blown fistfight. I missed all the action. It was my one night off. Only in New York.