We first caught sight of these beauties in Prague.

But we knew it was only a matter of time before someone made a grab for the doughnut ice-cream-cone market here in New York City, parlaying all that 'gram glory for piles of sweet, sweet money. And as it turns out, that someone is the ChikaLicious Dessert Club in the East Village, a venerable player in the photogenic dessert game.

ChikaLicious Dessert Club (as opposed to Dessert Bar across the street) is now selling ConeCHURROS®, their freely-acknowledged homage to the Czech #Trdelnik chimney cakes that started it all. 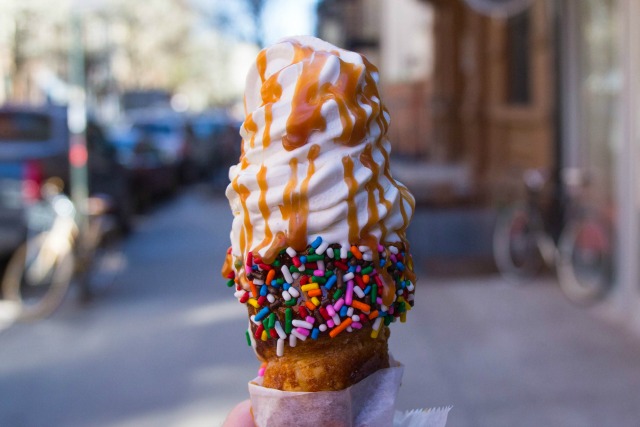 At ChikaLicious there is only one flavor of ice cream available to fill your cone, and that is vanilla soft serve. It tastes as utilitarian as it sounds. The proprietors make a somewhat halfhearted effort at variety by adding a drizzle of caramel, or a dip into some almonds or rainbow sprinkles. Unlike the Prague originals, Dessert Club does not line the interior of its cones with Nutella or any other delightful surprise.

The cones themselves are super sugary and flaky and crisp—more croissant in texture, really, than churro—and leak like crazy out the bottom. The cone part of your dessert adventure is by far the best part, though it makes you wish there had been a balance to each bite, as the experience winds up being basically all ice cream up top, mostly pastry below.

#ConeCHURROS® cost $9.99 with tax, and are guaranteed to generate a self-reaffirming number of likes on the social media platform of your choice.

ChikaLicious Dessert Club is located at 204 East 10th Street, just east of Second Avenue, and sells the ConeCHURROS® daily from 7:00 a.m. to midnight.

#chikalicious
#conechurros
#donut cones
#east village
#instagram food
#original
Do you know the scoop? Comment below or Send us a Tip
A new Gothamist is coming! We’ve moved comments over to our beta site. Click here to join the conversation and get a preview of our new website.