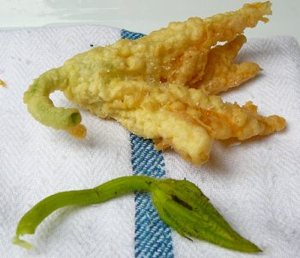 Late October is a the perfect time of the year to eat local zucchini blossoms, those fleshy, pale orange flowers that are often found stuffed or battered on fancy restaurant menus. The first part of this sentence would be true if zucchini plants were flowering now, but they’re not. Instead, consider the pumpkin blossom: Generally overlooked in the culinary world (like zucchini flowers once were before they were trendy), pumpkin blossoms are in incredible abundance this year, especially because there hasn’t yet been a lot of frost round these parts. There are many huge orange flowers still blooming on pumpkin vines out there, so either if you’re doing the whole Charlie Brown waiting game thing or going pumpkin picking somewhere on the outskirts of the city this weekend, there’s a really good chance you’ll be able to score a huge bag of flowers for cheap. If your friendly pumpkin patch guardian isn’t selling flowers up front, ask him or her if you might be able to borrow a few blossoms. Chances are the answer will be yes, and they might even be free. Once you get them home, keep them refrigerated unwashed and under a damp paper towel, the whole thing loosely wrapped in plastic wrap until you’re ready to cook them.

That sad looking guy on the bottom here is an unopened pumpkin blossom, precisely the kind of flower you want to avoid for this recipe. Look for clean, bright orange flowers; the petals will appear slightly spongy. For an easy recipe that doesn’t involve piping gobs of mascarpone cheese into the flowers, try tempura, which also keeps your food cost down. Fried pumpkin blossoms are good eating on a shoestring budget.

When you’re ready, mix an egg yolk, a quarter cup each of rice and all-purpose flour, and a pinch of salt and dash of nutmeg in a small bowl. Add soda water to the batter in a steady stream until you’ve reached your desired consistency; thicker batter makes whatever you’re frying puffier, while thinner batter makes for a more authentic tempura. Carefully remove the naughty bits of the flower- you should be able to pinch them out with your thumb and forefinger pretty easily. Wash flower and lightly pat dry. Before you dip and fry, throw a couple of ice cubes into you’re bowl and let the batter sit for a few minutes. Holding pumpkin blossoms by the stem, dip them in the batter and then gently cast into some 350º oil, being extra careful. Fry to desired consistency, drain on paper towels, and salt. Serve fried pumpkin blossoms with aioli made from this recipe at Epicurious, substituting half the called-for amount of olive oil with pumpkin seed oil. It’s a whole pumpkin on pumpkin thing. Roasted French pumpkin seed oil is available from Kalustyan’s.