Would you like a free three-course meal, based on recipes from the Old and New Worlds circa 1620, prepared by April Bloomfield of Spotted Pig, Breslin, John Dory, Salvation Taco, amazing-sounding-Salvation-Burger-coming-soon fame? Plus two free drinks?

Yes, those are rhetorical questions. No, this isn't a joke. Here's how you can get yours:

1. Show up at the Saints & Strangers Pub (it's a made-up pop-up thing) today and/or tomorrow, for lunch and/or dinner, at 38 West 26th Street near Sixth Avenue.

4. Go inside and eat and drink!

About the inside: the upstairs has been tricked out to resemble a 1620s English pub; the stairway to the lower level represents the Mayflower, festooned with ship's ropes and rigging; and the dining room downstairs is like New World world, complete with Native American games such as Adowiz, which is basically darts. You can make corn-husk dolls down here, too, if you want. 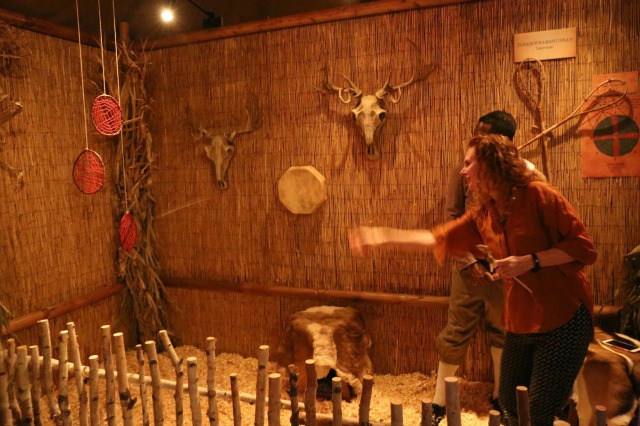 Playing throughout the place, on dozens of historically accurate flat screen TVs, is the endlessly looping trailer for the Saints & Strangers "two-night movie event"—Vincent Kartheiser, of Mad Men fame, and Ron Livingston both star—which is about the first Thanksgiving of the Pilgrims and the Native Americans, and starts airing November 22nd on the National Geographic Channel. They are the ones paying for everything here, so be polite and watch for a few minutes.

But back to the food: it is delicious. Bloomfield said she tried to stick with the spirit of early 1600s cuisine rather than rigorously recreate what these long-ago folks might have actually ate, without getting "too chefy" with things. So the Salted Beef Sandwiches from the Mayflower Voyage section of the menu is made from incredibly tender corned beef rather than whatever nightmare those poor bastards had to choke down in the middle of the Atlantic. 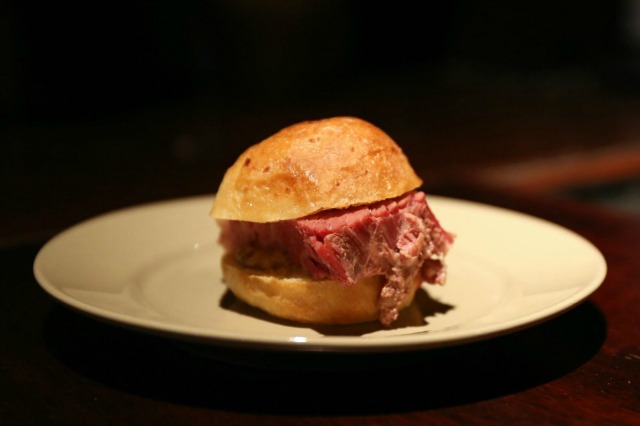 The Pork Pie, from the Old World—did you know that meat pies came about because people needed a protective package in which to carry their food around, so they stuck everything in a crust and threw it in their pocket or sack?—is stuffed with a wonderful, intensely rich pate. And the Skamontahigan, Adebakwal, Wasawa (aka Three Sisters Succotash), a blend of hominy, beans, and squash, benefits greatly from the heat of some sort of chili pepper. You'll leave well-fed.

Bloomfield concedes that the food in 1620 was likely much plainer than what she's serving here, but I promise you will not mind the anachronisms.

#april bloomfield
#free food alert
#saints & strangers
#original
Do you know the scoop? Comment below or Send us a Tip