Eat Bonkers Burgers Inside An '80s Arcade Game At PYT Philadelphia has supplied us with many meaningful things, from the Declaration of Independence to Fresh Prince Of Bel Air, cheesesteaks to cream cheese. And now, we can thank the city of brotherly love for PYT, a Philadelphia-based burger joint that's planting its first NYC roots on the Bowery. It's been a long wait since we found out they were coming to NYC, but the wait for doughnut burgers ends this week, when the restaurant soft opens.

Owner Tommy Up's going to be offering a regular menu of burgers plus innovative specials as he's done in Philly. Previous iterations have included a fried PBR burger, one that employs deep fried Twinkies as its buns and another topped with fried quacamole. Business Insider got a sneak peek of some of the new items, which include a Cheesesteak Pretzel Roll Burger and the Doh!nut, a Homer Simpson-inspired offering with American cheese and chocolate-covered bacon slapped between two glazed doughnut halves. Good thing it's almost bulky sweater season. 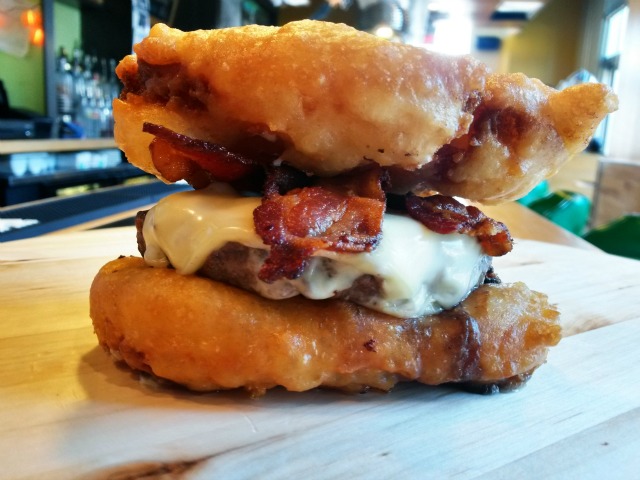 The interior is just as inspired as the menu offerings. Up brought about Philly-based design firm Outside In, who created an homage to the '80s inside the restaurant. There's a mural dedicated to arcade game Burger Time, as well as a door made up in the style of a classic arcade game, which, if taken, leads to "pizza speakeasy" SRO (run by a different entity) in the back. Other nostalgic touches include a Garfield lunchbox and classic TVs, sourced from Outside In owner Chris Thomas on his visits to NYC, plus items from his personal collection like a Michael Jackson sequined glove and a few other King of Pop Easter eggs throughout the restaurant.

#80s
#bowery
#burger time
#burgers
#new restaurant and bar radar
#philadelphia
#pyt
#retro
#original
Do you know the scoop? Comment below or Send us a Tip