[UPDATE BELOW] East Village vegetarian haven—and organic bar!—Counter is closing. (A moment of silence please.) Last night owner Deborah Gavito sent out an email to her hungry masses which said she sold the restaurant after 8 years in business, and she would be closing up shop sometime in February. For neighborhood vegetarians, John Norris has some tips on where to fill the void: "Dirt Candy, on E 9th St., the old standby Kate's Joint, Gobo."

We've contacted Gavito for more details surrounding the closing, but in her mass email she noted that she "will be focusing on my bakery business, Body & Soul" (which you can find at Union Square and other Greenmarkets). She also plans to open a vegetarian restaurant in Brooklyn with Counter's chef and its manager, which will be a shared endeavor. Gavito had always been tinkering with a little rooftop garden at Counter, so perhaps this new space will allow her to expand that. And maybe a cheaper lease in Brooklyn will bring down some of those prices! 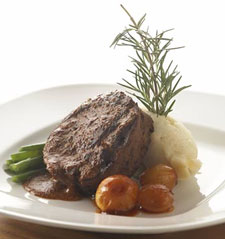 Counter isn't dead yet though! And until that last slice of seitan is served up, they'll be offering some specials. Check them out below, and head over before they dim the lights on 1st Avenue.

Planning on going vegetarian in 2011? Get a head start and hit up Counter's New Year's Eve prix fixe. For 40 bucks you'll get spicy chickpea soup, bourbon glazed seitan, truffled smashed potatoes, and a mess 'o greens. Plus gingerbread cake and a glass of bubbly!

UPDATE: Gavito tells us they are looking to open the new place in either Williamsburg or Greenpoint. She notes they were not priced out of the East Village, but rather she "decided to simplify" her life and "the day to day grind of running a restaurant became less and less appealing." For the Brooklyn establishment, she says "I love my chef Elena Balletta. She's talented, young and energetic. I'm going to help finance her restaurant, but I want absolutely nothing to do with running it. I would like to set it up like a little coop so everyone gets a little bit more than a paycheck out if it."

#closing
#counter
#deborah gavito
#east village
#restaurant
#vegetarian
Do you know the scoop? Comment below or Send us a Tip