A few months ago, Google finally confronted their glasshole problem head on, releasing a list of “Do’s and Don’ts” for Glass Explorers that amounted to a very call for basic human decency and respect. Paramount among their concerns were glassholes who break the rules or are rude to those of us who aren't aspirational cyborgs. Now, one East Village restaurant has incurred the wrath of these very glassholes for the crime of asking someone to please put their Glass away inside their restaurant.

EV Grieve has the details about what went down at 3rd Avenue joint Feast at the end of April: Katy Kasmai was asked to take off her Glass before dining, because the restaurant had previously received several comments about privacy from other guests when a Glass Explorer ate there. Kasmai allegedly refused to take hers off, and left.
"We try to give everyone the best experience possible and she didn't get that," Feast management told them.

Karmai wrote about the experience on Google+ on April 20th: "For the first time ever this place, Feast, in #NYC just asked that I remove +Google Glass because customers have complained of privacy concerns in the past. Never has happened to me before in the one year I've had Glass. I left. #throughglass﻿." She added in a comment, "I did ask if they restrict cellphone access as well. They said no. Anyway plenty of good restaurants nearby, I'm at ABC Kitchen now. Better food. No strange Glass rules.﻿"

And then, Feast says that they suddenly were inundated with negative reviews online—most of which referenced the Glass situation: 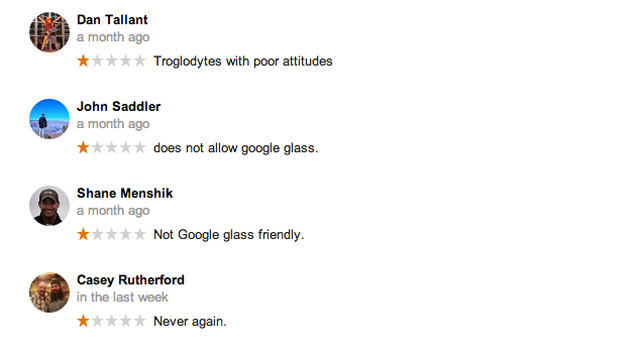 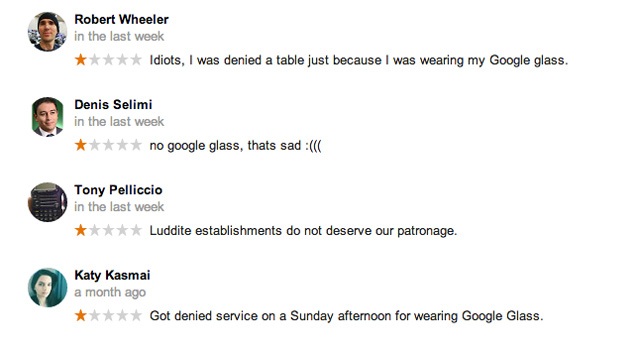 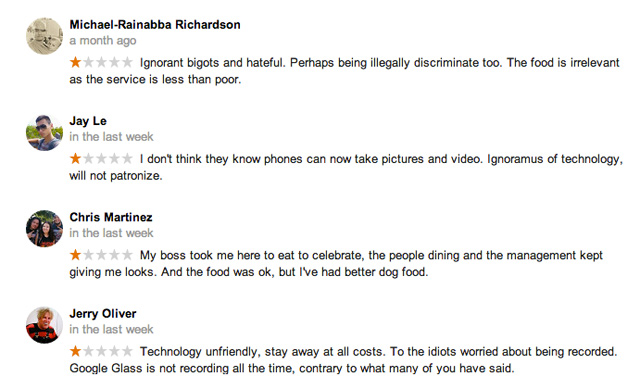 Let's circle back around to those Google Do's And Don'ts again:

Don't Be creepy or rude (aka, a “Glasshole”). Respect others and if they have questions about Glass don’t get snappy. Be polite and explain what Glass does and remember, a quick demo can go a long way. In places where cell phone cameras aren’t allowed, the same rules will apply to Glass. If you’re asked to turn your phone off, turn Glass off as well. Breaking the rules or being rude will not get businesses excited about Glass and will ruin it for other Explorers.

"When the first thing that comes up when you search Feast in Google is a 3.1, it can really hurt a restaurant like us," the Feast manager told EV Grieve. "Then you have 13 people, which is about half the total reviews, who have never been to our restaurant let alone live in NYC, leave you one-star reviews … it's malicious and technically a violation of Google's own terms for leaving reviews. Again I can understand her leaving the one-star based on her experience, but 12 others with no experience on who we are or what we do is unfair."

Despite—or perhaps because of—this bad press that came from this situation, Feast says they're open to revisiting the issue in the future: "The fact is that the policy of asking Google Glass wearers to remove them is based off experience. It's not a policy set in stone so it could very well change."

#east village
#feast
#glass
#glassholes
#google glass
#katy kasmai
Do you know the scoop? Comment below or Send us a Tip