Since that infamous day in the Exumas in 2017, it has become a tradition to compare any failed festival or scammy event to Fyre Fest. When the New York City Pizza Festival turned into a total shitshow in 2017, it was Fyre Fest: Cheese Edition. When WinterFest organizers forgot to finish building their attractions and started harassing vendors, it was Fyre Fest: Christmas Vacation. And now, people angry over an Atomic Wings Super Bowl meltdown are comparing it to Fyre Fest as well.

EV Grieve reports that there was a logjam of delivery people and hungry customers inside and outside the East Village location of Atomic Wings, on 1st Avenue between 11th Street and 12th Street, on Sunday afternoon prior to and during the Super Bowl.

"Those delivery guys standing outside were still there well into the evening as the store was completely overrun with orders," one person wrote to EV Grieve. "They had no directions as to what to do. People were furious, delivery guys were angry, and police were ticketing and towing double-parked cars outside. So you’d hear people scream 'who has the gray Nissan?! They’re about to tow it' every 5 minutes."

The Super Bowl is one of the biggest days of the year for Atomic Wings, and it's not unusual for there to be a backup or delay in delivery—I've ordered from them before for the Super Bowl and can remember the wings taking an extra 30 minutes or hour to be delivered. But they were still delivered...unlike what seems to have occurred this weekend.

Me and a few of my closest friends trying to figure out if we’re getting our @AtomicWings before the #NYJets or #NYGiants make the Super Bowl #youhadonejob pic.twitter.com/Mr1vgNrFg3

@AtomicWings I ordered 100 wings from your East Village location that were supposed to come at 4pm and still have not been delivered. I have called and the line is constantly busy, I’ve emailed and no one responded. Can you help please??

@AtomicWings I ordered 100 wings to be delivered at 17:30 est and I haven’t received my order nor been able to get in contact. Can someone who works there please #dm me. I’ was on hold for 20 minutes #CustomerService #USA #SuperBowlLIII

The reviews on Yelp have been pouring in, and they paint a picture of an angry horde of football lovers storming the gates. Here is just a taste of the many one star reviews they've received over the last 48 hours:

Jesse P.: "0 wings delivered after 12 hrs for super bowl. Place is a sham. Scam. Fyre festival of Wings. Should go out of business and lose their ability to be a business in NYC after fiasco that happened yesterday with hundreds or thousands of customers without wings. I mean what else are you supposed to eat for the super bowl?

Many left hungry. Place charged credit card. Need to be reviewed by BBB and sued for malpractice"

Wing K.: "As the King of Wings, I went out of my way to pre-order (3 days in advance) 100 wings for a small circle of fellow wing enthusiasts to enjoy at a Super Bowl party. Turns out, 'Atomic Wings' doesn't actually sell or deliver wings. They do charge credit cards though. My guests became quite hangry during the big game, and I had to talk them out of marching down the Street and demanding their wings in person at halftime. Will never order from Atomic Wings in the future, and will recommend my sizeable network of chicken wing lovers do the same."

Zachary E.: "I ordered over 100 wings for my super bowl party a week in advance. I prepaid and even called the restaurant the night before to confirm the order. Not only were the wings not received but they unplugged their phone line so that no one could get in touch with them and have not reconnected it as of 12:30 P.M. the following day.

I WILL NEVER BE ORDERING FROM THERE AGAIN AS THEY RUINED MY SUPER BOWL PARTY AND STOLE MY MONEY!!!!"

DM C.: "What an absolute joke of a place. I placed an advanced order for a large order of wings to be delivered at 5pm on Super Bowl Sunday. They accepted my order but obviously had no business doing so. I called several times, got mixed information from Seamless and then at 8:45, I just canceled the order. I got a cancellation notice and then with about 10 minutes left of the game, with half the people gone from my party, the 2 trays of wings show up.

Atomic WINGS, you are a WINGS place. It's Super Bowl Sunday. You should put two and two together and realize that it's going to be an extremely busy day. Be prepared and don't accept orders you can't fill. Get your act together."

Jake V.: "Placed an order for 50 wings to be delivered at 6pm FOUR DAYS IN ADVANCE. It is now past 9pm and the wings are no where to be found. I have called the restaurant multiple times and their phone has been off the hook all night. WHERE TF ARE MY WINGS? Please advise."

Jesse Y.: "It's Super Bowl Sunday, I ordered wings for 5PM delivery on Wednesday. It's currently 8PM and no wings in sight.

At 6PM, after calling 8x and getting a busy tone each time, I went to the store to see what was going on. Take a look at my photo. Dozens of people crammed in the store, delivery guys waiting for their orders outside, and zero direction from management as to what was going on. The biggest night of the year for wings, and these guys dropped the ball. After waiting for 30 minutes, with the game already starting, I left. No one said anything about how to get a refund, who to talk to for their orders, or what the wait would be. Trust me, I will NOT be paying for this order and will be calling for a refund first thing tomorrow.

Get your act together. It's the Super Bowl. You should have thousands of wings premade. Terrible." 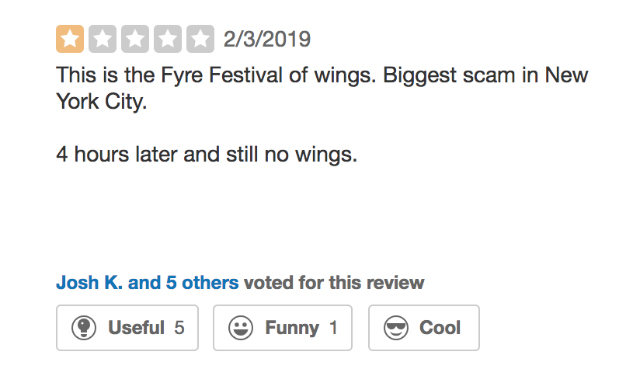 We've reached out to Atomic Wings, which has over a dozen locations around the city, for comment and will update this important story when we hear back.

Today Gothamist published an article claiming that the Atomic Wings location that is located in the East Village scammed their customers. This couldn't be further from the truth. This is a franchisee owned location which has been operating for many years now. Unfortunately this location had an equipment failure midway through superbowl sunday, which severely impacted their ability to cook wings. The staff worked incredibly hard under tremendous pressure to fulfill as many orders as possible. We were able to fulfill 90% of the orders, but in the end we fell short, and for this we are greatly sorry. The franchisee has been reaching out to customers and issuing refunds as well as store credits. To call this a scam is the furthest thing from the truth. We love our customers and appreciate the support we've received over the past thirty years. Anyone impacted can reach out to us at info@atomicwings.com

#atomic wings
#delivery
#east village
#super bowl
#why god
Do you know the scoop? Comment below or Send us a Tip
A new Gothamist is coming! We’ve moved comments over to our beta site. Click here to join the conversation and get a preview of our new website.