Last night the 11th Street A-B-C Block Association gathered to discuss strategies for fighting off a dreaded 7-Eleven set to open on Avenue A and 11th, in the space formerly occupied by Bar On A. Some 40 local residents convened at Father Heart church on East 11th Street to discuss the chain's relentless advance: 7-Eleven plans to open 100 locations across Manhattan by 2017. While the odds of a block association stopping its spread are slim, there was no shortage of enthusiasm and ideas firing around the room last night.

Bob Holman, founder of the Bowery Poetry Club and the "No Chains on the Bowery" campaign, brought the performance art to the meeting, draping himself in chains that he rattled defiantly during his speech. Tired of corporations trying to "Pringle-ize our population" with chains that are "boring and bland and not New York," Holman defiantly declared that "we refuse to fit in the tube." His remarks highlighted the two main complaints about 7-Eleven: it's impact on neighborhood identity and aesthetics. As one participant put it, "The reason 7-Elevens are so offensive is that they replace bodegas." 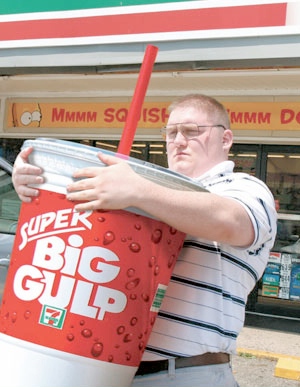 (This could be anywhere.)

Many of the proposed actions involved raising public awareness about individual bodegas, their owners and workers, thus emphasizing their history and relationship to the community and neighborhood. A more ambitious idea involves calling for legislation similar to an ordinance in San Francisco that limits chains, as part of an attempt to protect independent retailers and preserve the city's distinct character. To be sure, 7-Eleven can hire local residents and be franchised by locals—something the company says it fully intends to do. But one imagines that would do little to mollify the block party.

Rob Hollander, a local community activist, organized and led the meeting. In interview afterward, Hollander told us his main objection to chains was homogenization, and argued that cultivating the neighborhood's identity and history would be crucial for the anti-chain movement. He also told us some bodega owners "don't really think that 7-Eleven is really going to be that much of a competition for them. They're concerned about the quality of the neighborhood. They have the same concern as the residents."

#7 eleven
#chains
#east village
#original
Do you know the scoop? Comment below or Send us a Tip