Dumont Is Being Evicted From Williamsburg Space Of 12 Years

The eternally popular and respected Dumont is apparently being evicted from its Williamsburg home of 12 years, following the January suicide of owner Colin Devlin. Devlin's body was found in his car in Pennsylvania after he was said to have received disturbing news about the financial state of his restaurants, including Dumont Burger and the then-recently shuttered Dressler.

The eatery's landlords have given Devlin's widow, Kristina Greene, five days to vacate the space. A notice posted in the window, first spotted by Bedford + Bowery, is dated March 21st. 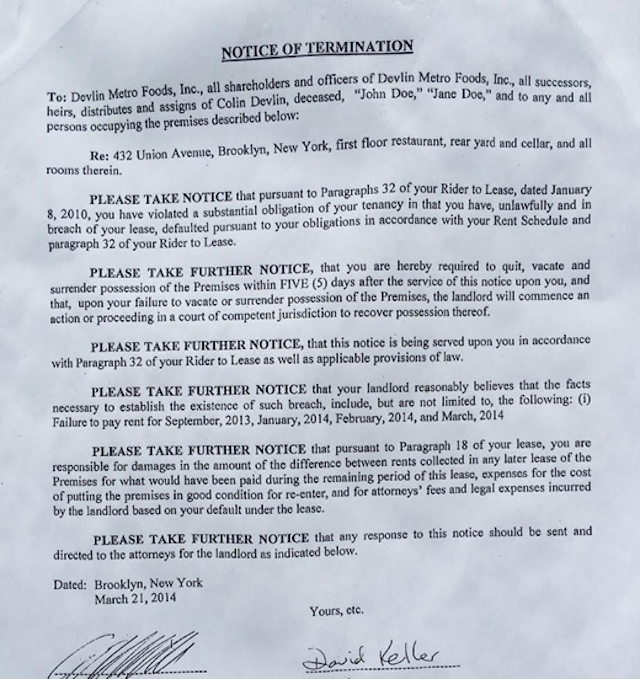 The restaurant has been shuttered since January; Greene told Eater at the time that the closure was simply on account of needed renovations being done to the garden and kitchen, and that it would reopen by spring. According to the notice on the door, Dumont's shareholders have not paid rent on the space since the beginning of the year.

A message on Dumont's website still asserts that the restaurant was "closed for unforeseen circumstances" but will "reopen in a short period of time."

Dumont Burger, previously operated by Devlin but split off in January, remains open, confirmed an employee who answered the phone there.

#colin devlin
#dressler
#dumont
#dumont burger
Do you know the scoop? Comment below or Send us a Tip