The first time I went to a yoga class, I was so inflexible and self-conscious I swore I'd never go back. The second time, I was dragged by a friend who promised me no one cared if I kept toppling over in a high lunge. "Everyone's focused on themselves, not you," she said, and she was right—I kept going to class despite my oafishness, and several years later I am able to stay nearly upright, thanks very much. But this reluctance to look silly is not unique to me—in fact, one local yoga teacher says this spotlight effect strikes so many first time students she's launched a "drunk yoga" class to loosen up beginners.

Eli Walker, 28, an actress and yoga instructor who lives on the Upper West Side, has been teaching a regular "Drunk Yoga" series at Grey Lady on the Lower East Side on Monday nights, offering newcomer yogis an open wine bar paired with an easy vinyasa class (wine glass in hand) in hopes of teaching them yoga's not so scary, after all. "I've had a lot of people, whether in classes, or friends, or people I met at parties say something like, 'I'd love to try yoga but I can't because I'm not flexible, or too afraid I'd look stupid,'" Walker told Gothamist. "I thought it would be fun to turn yoga into more of a party. If I made it into a game it would make people more comfortable."

It was then that Walker's drunk yoga class was born. She started researching yoga sequences that incorporated drinking, got Grey Lady to lend her their private events space for a couple of hours, and invited beginners and experienced yogis alike to come booze while doing arm balances. Not that mixing alcohol and yoga makes it easier, per se—I stopped by a class a few weeks ago and found hanging my head between my legs slightly more unpleasant while under the influence. But for the couple of newcomers, it at least smoothed out some of the challenges. "One of my students said he can't touch his toes on a day to day basis, but when he's doing drunk yoga, he can touch his toes," Walker said. "It makes him feel empowered to do something he thinks he can't with his body." 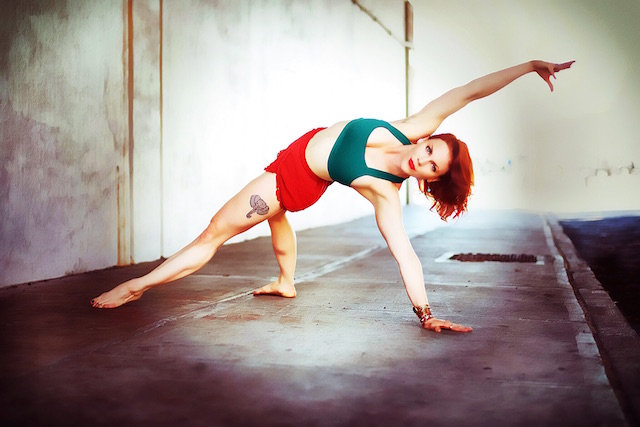 Walker's drunk yoga class certainly isn't the first of its kind in New York, where booze seems to go hand-in-hand with nearly every challenging activity. "I feel like New York is a big group of recovering perfectionists, so they feel like if they can't already do something well they shouldn't do it all," Walker said. "There's this whole culture of being afraid of showing incompetence. But life isn't about figuring out how to avoid obstacles, it's about developing technique to get through obstacles better."

Walker's yoga class costs $30 (unlimited wine included) and runs from 7:45 p.m. to 9 p.m. on select Mondays at Grey Lady, 77 Delancey Street on the Lower East Side. See her website for details.

#drunk yoga
#Lower East Side
#yoga
#original
Do you know the scoop? Comment below or Send us a Tip