Here are some infrastructure details from the Trust:

The restoration of potable water is a cornerstone project in the Island’s comprehensive capital program to ready the Island for its next chapter. The first phase of the project, the construction of nearly 2,500 linear feet of new pipe from Red Hook to Governors Island, started in summer 2013 and was completed in spring 2014. The new pipe was installed via horizontal directional drilling through bedrock beneath the Buttermilk Channel. The remaining pipe and associated equipment to successfully connect the Island to New York City’s water system was completed in early June 2014. The New York City Department of Environmental Protection (DEP) has performed water quality testing to successfully confirm the water is potable.

There are two public drinking fountains, one at Liggett Terrace and the other is near Yankee Pier. Others will be added as the infrastructure grows. 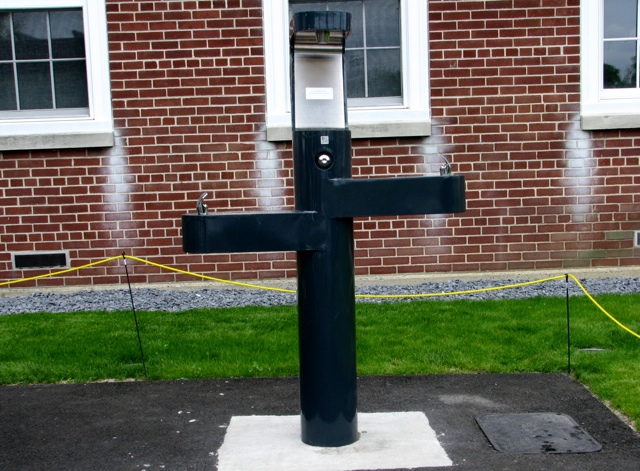 One of the water fountains (Governors Island)

The Trust adds, "Later this summer, new play fountains will be open in the Liggett Terrace hedge garden. These three fountains, set within the hedges, feature 90 jets creating playful swirling patterns with water."

#drinkable water
#governors island
#potable water
Do you know the scoop? Comment below or Send us a Tip