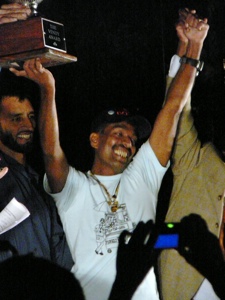 All 5 of this year’s nominees competed for attendees’ votes with their food at the Tompkins Square Park event: Veronica Julien of Veronica’s Kitchen (Front and Pine Street) was out of macaroni and cheese, but served jerk chicken, oxtails, fried fish, and rice and peas. Kwik Meal’s Mohammed Rahman (Saturday’s “People’s Choice” winner) remained cool and collected, dispensing lamb pitas by the fistful. The formidable Super Taco delivered a less-than-full menu but still drew raves.

Standing at a golf cart-sized kitchen, Thiru “Dosa Man” Kumar made his signature pondicherry dosas to order, spreading dollops of batter over the griddle surface with a tool that looked like hockey puck. He stuffed and rolled the crispy dosas, deftly chopping them into perfect thirds with his spatula. “Hey Dosa Man,” shouted Fares Zeideia of Astoria’s King of Falafel & Shawarma, the other finalist, who was simultaneously doing a little jig for his customers and serving huge potions of chicken with white sauce to an amused crowd. “We made it,” exclaimed Zeideia. “Are we rocking or what?”

Kumar smiled and spread some more dosa batter on the griddle. His assistants handed out paper plates with hot sauce to eager voters waiting on dosa magic. Vendy Award Judge (red sash and all) Ed Levine came over to the cart and asked if he could get some food, and Kumar obliged with a sampler plate. One of Dosa Man’s assistants explained that all the cart’s food is vegan, pointing out the different items on the plate as she handed it over. “That’s the dosa,” she said, “made with lentils and rice.” Levine thanked her, saying, “Oh, I’ve had a few dosas in my day.”

In a surprise move (and in defiance of the given odds), the Super Taco truck suddenly dropped its flaps at 5:40 PM, leaving part of the carne asada heat-seeking crowd listless, and with more than an hour left at the polls. Rumor had it that they had simply run out of food, which made sense because Super Taco had the longest line of voters for most of the afternoon. Around 7 PM, all the carts stopped serving food. 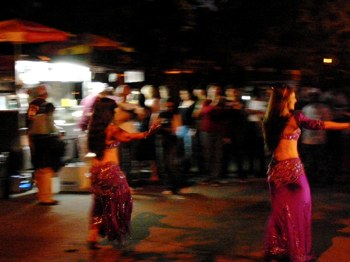 Just as the awards ceremony was about to begin, a large portion of the crowd suddenly migrated over to the King of Falafel & Shawarma cart, where two bedazzled, purple-clad belly dancers emerged from a parked white van and performed a synchronized routine. During their set, the belly dancers were even joined by King of Falafel’s Fares Zeideia, who pounced around them in his custom print Chefwear, clapping his hands above his head. Just hours earlier, Zeideia had been heard conspicuously and gleefully singing along to Harold Melvin & the Blue Notes’ “If You Don’t Know Me by Now.” Like the other nominees, the man had been smiling all day.

The Vendy Awards are held every year by the Urban Justice Center’s Street Vendor Project, a non-profit alliance that provides support and representation for the vendors of our city. More information can be found here.