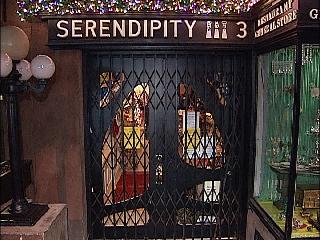 Just a week after making headlines for unveiling the world’s most expensive dessert – $25,000! – the popular Upper East Side restaurant Serendipity 3 has been shuttered by the New York City Department of Health. Could all the hoopla surrounding the Frrrozen [sic] Haute Chocolate have brought some unwanted attention to the establishment?

The shutdown went into effect last night and calls to the restaurant have thus far not been serendipitous. We do know that the place is gated and dark as a Broadway theater these days – we pity the poor parent who promises their disappointed kids a sundae at Serendipity to make up for missing The Grinch!

UPDATE: After we posted news about the DOH shutdown, Eater received an unattributed "tip" that DOH had shutdown Serendipity. Now Eater's gotten appetite-spoiling details about last night's inspection: "The inspector observed a live mouse, mouse droppings in multiple areas of the restaurant, fruit flies, house flies, over 100 live cockroaches." But if you ask Serendipity, it's all because of a 'water leak in the kitchen.'

Serendipity’s second most recent health inspection was on October 22nd; they racked up 41 violation points, which is above the average 14 point score for New York restaurants at their last inspection. The restaurant was cited for a “sewage disposal system in disrepair, conditions conducive to vermin, live flying insects present, roaches, mice, and no authorization to operate the establishment available.” You know, the standard New York stuff that makes you want to cook all your meals at home.