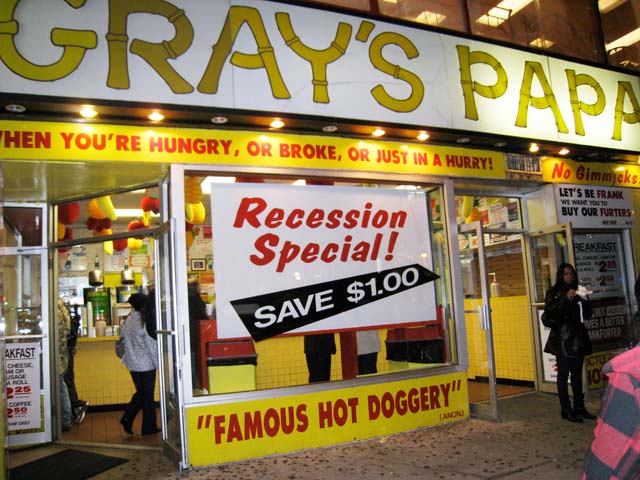 First the national debt clock runs out of placeholder digits, and now the price of two hot dogs and a drink from Gray’s Papaya—their legendary ‘Recession Special’—is increasing five whole cents short of a buck, from $3.50 to $4.45. On the subject of the price hike that he'd warned the world about last February, 72-year-old founder Nicholas Gray tells the Times, “It’s always very traumatic for me as well as the customers.”

Gray's Papaya, a New York mini-empire known for cheap hot dog and paper tropical fruit cutouts hanging from the ceiling, opened its first store in 1972. Nicolas Gray modeled his store on Papaya King, another hot dog shop whose stores and registered trademarked line “Papya King frankfurters are tastier than filet mignon” date all the way back to 1932. (Their franks are also vastly superior to movie hot dogs.) The ‘Recession Special’ at Gray's cost $1.95 throughout “most of the '90s,” according to the Times, then increased in 2002 and 2006.

Truly a sad day out there for hot dog lovers out there, especially fans of the economical combo deal that includes a "Coconut Champagne" or "Strawberry Supreme." The drinks at "Papaya" places are meant to be healthful elixirs to uplift the downtrodden in hard times. "Anything but pineapple and orange," warns the Times. They're cost-prohibitive.