Does NYC Have A Belligerent Bruncher Problem?

by Christopher Robbins
The Belligerent Bruncher

might not actually own half of Manhattan, but the person who recorded his tirade says he's part of a larger problem. "I filmed them because this is one of a thousand incidents that have happened around there," the uploader says. "The week before they had to call an ambulance because someone got so drunk at one of these brunches they crapped themselves and had to be taken to the hospital."

A manager at Pranna strenuously denied that 20-year-old Gerry Shalam (whose father is a garment executive, according to The Smoking Gun) imbibed at their restaurant, telling us that she reviewed the restaurant's video surveillance. Pranna Tweeted that "there are several bars and brunch locations around Madison Avenue." The uploader, who asked to remain anonymous because he's concerned about revealing the location of his home, said all these restaurants produce a nuisance on the weekends.

"I'm heading to my doorway with my family and these guys are stumbling all over the place, it's like 4 p.m. in the afternoon," he said. "It's scary. It's just not safe, people are getting hurt, it's absurd."

He also remains unconvinced by Pranna's denials: "Pranna says they weren't there, but I saw them standing outside the restaurant with all the other drunk people."

A commenter on Gawker expounds on the issue:

I live right next to where this is being filmed and I totally understand why the guy was filming this idiot and his idiot drunken friend. The neighborhood has had it with Pranna. Anywhere between the hours of 2pm and 6pm on Saturdays and Sundays you will see people puking, passed out, or completely fucked up on the sidewalk from their shenanigans inside the restaurant/club/whatever. It's disgusting, and the place attracts trust fund kids, social climbers, and wannabe rich-folk who spend their whole two week paycheck there. This guy is probably filming all of this so he can send it straight to the higher-ups in the city in an attempt to get the place shut down.

Whether or not the group was in Pranna is unclear, but Shalam's Facebook photos seem to indicate that the group was at Bagatelle on the day in question. 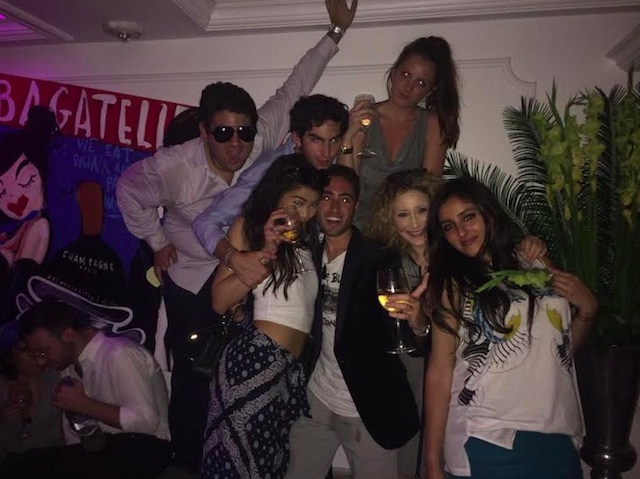 Bagatelle did not return our phone calls or emails. Shalam did not respond to our Facebook message.

Community Affairs officers at the 13th and 6th Precincts said they were not aware of any recent complaints about Pranna or Bagatelle.

According to Community Board 2 records, neighbors "spoke vociferously in opposition" to Bagatelle's request for sidewalk cafe seating last year, citing "substantial noise issues due to extremely loud music in the interior of the restaurant that spills out to the street and often for blocks around." In February, residents said that the restaurant "has made steps to address those issues." Bagatelle's liquor license is up for renewal in October of 2015.

Pranna has had to address "complaints regarding noise and violence" as recently as last year. Community Board 5's district manager was unavailable to comment. Pranna's liquor license is up for renewal at the end of September.

Woman: “Can you please not do that? Thanks.”

Videographer: “Get the fuck off my property.”

"Jerry": “My dad’s in fucking real estate, you’re going to tell me this is your property.”

Videographer: “Yeah? What’s your name Mr. ‘I Own Half Of Manhattan’?”

Videographer: “Yes, I’d love for you to call the cops.”

Videographer: “Please call the cops. Oops, your friend just fell. Why don’t you go worry about your friend.”

Videographer: “Your friend is passed out on my fucking sidewalk.”

Videographer: “You guys need to call the cops and get your friend an ambulance because he can’t even walk.”

"Jerry": “And why are you taking pictures?”

Videographer: “Because I’m trying to get this place—”

Videographer: “Yes, it absolutely is.”

"Jerry": “It really is? Because I’m a fucking lawyer. Tell me how that’s your fucking legal right?”

Videographer: “Oh I thought you were in real estate?”

Videographer: “I don’t care about you. Your friend here needs help.”

"Jerry": “What property? Where’s your property? Cause my dad’s a fucking real estate agent in fucking New York and you tell me where’s your fucking property? Okay? And I’ll call the fucking cops.”

Videographer: “You’re not allowed to touch me, dude. So right now you’re committing a crime.”

#Bagatelle
#belligerent bruncher
#boozy brunch
#brunch
#flatiron
#pranna
#west village
Do you know the scoop? Comment below or Send us a Tip