Do You Want The Baby Gravy Sandwich Or The Douche Bag?

What's more appetizing: the savory gravy made from the bones of the newly born or the zesty flavor of vaginal cleansing products? These are the kind of haunting questions you must ask yourself when seeking a sandwich at Park Slope's 215 Fine Foods Deli on 4th Avenue, which offers a selection of oddly-named creations between two slices of bread. Tipster Carla Sosenko and her boyfriend Brian Levinson discovered the head-scratching hoagies when seeking out sustenance following a night on the town.

A deli worker at 215 Fine Foods tells us the "Douche Bag" contains grilled chicken, swiss, avocado, spinach and blue cheese dressing and sells for a reasonable $7 on a hero. The "Baby Gravy" contains roast baby beef with bacon, onions and fresh mozzarella and sells for $8 on a hero. The names would appear to be meaningless unless avocado is a total Bro food in which case MY WHOLE LIFE IS A LIE. When pressed to explain the origin of the sandwich names, the man on the phone claimed ignorance. "I'm just a worker!" A likely story, deli man.

Peruse the menu for yourself below for other creations like "Lake House" (is that you, Keanu?), "The Bid Apple" (a scathing takedown of our capitalist society?), or the "Bikini Sherman" (...yeah I got nothing.) Now who wants a Butter Face? 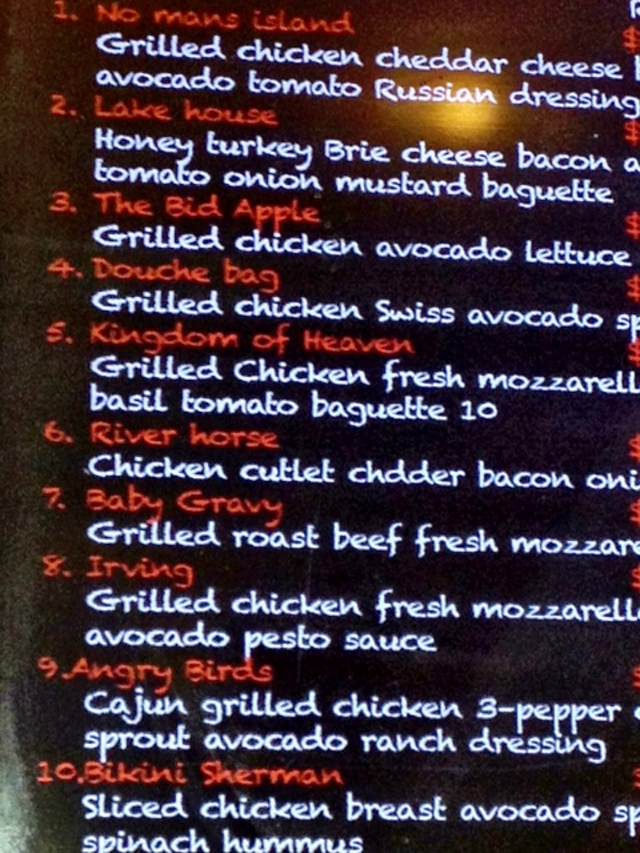 #215 fine foods
#funny names
#menu
#sandwiches
#original
Do you know the scoop? Comment below or Send us a Tip