Dining While Rome Burns: Zagat's 2009 Guide is Out! 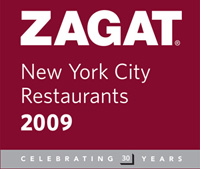 Just as the current economic conflagration is blazing brighter than ever, two major restaurant guides have appeared in as many days this week, telling you all the best places to dine in style until the money runs out. Yesterday saw the release of the prestigious Michelin NYC guide, and today we have the more democratic Zagat restaurant guide, compiled using reviews from 38,128 local surveyors who ate out over 6.6 million meals this past year, covering 2,073 eateries across the five boroughs. Some of this year's standouts include Asiate (best decor), Union Square Cafe (most popular), Per Se (best food) and Momofuku Ko (best newcomer).

But besides the exhaustive restaurant ratings, the guide has some revealing stats about how New Yorkers' dining has already been hindered by the economic downturn. The average cost of a meal in New York City is up 3.3% over last year’s $39.46, well above the Zagat national average of $34.09 and second only to Las Vegas ($44.44). The number of restaurant openings in NYC declined for the first time since 2003 (from 163 to 119), more diners are cutting back on alcohol consumption (19%), and 38% of New Yorkers say they're eating out less often because of hard times. To that end, Zagat is always a handy resource for finding under $35 dinners and BYOB spots.

Tim and Nina Zagat, who started the guide thirty years ago with most of the survey info coming from friends, will be at Borders Columbus Circle tonight at 7 p.m. to sign copies of the 2009 edition. (They've got a special Zagat Anniversary website with things like this copy of the first edition restaurant survey.) And this year's guide was stellar for Brooklyn; the borough claims the title of Top Hamburger (Williamsburg's DuMont), Top Pizza to (Carroll Gardens' Lucali, edging out Da Fara), Top BBQ (Fette Sau in Williamsburg) and Top Turkish Food (Sahara restaurant in Gravesend). The other big winners, including best new restaurant you still can't get into, after the jump.

#2009
#guide
#ranking
#restaurant
#zagat
Do you know the scoop? Comment below or Send us a Tip