When the new Taco Bell Cool Ranch Doritos Locos Tacos arrived at the office piping hot via messenger eagle, we initially approached our organs to review the concoctions. Rebuffed with threats of a walk-out (Management says the chants involved something about mixing aluminum-tainted liquor with avocados) we are left with only our Brain to try and make sense of the tacos' intoxicating odors and dopamine dust that chars our nostrils and blankets our fingertips.

O that smell! If all icebergs were required to manufacture Doritos Locos Tacos on little stands above the water (as proffered by the doomed Caution Winds Act of 1907) the fog-addled souls aboard the Titanic would have crinkled their noses, gasped through their kerchiefs, and turned right the fuck around and away from danger.

Then again, if one possesses the Ranch Gene (as the Titanic's captain, Edward John Smith, reportedly did) he or she might steer directly towards the scent, if only to impale themselves on the The Sirenum Scopuli of Pleasure. [Editor's note: Goddammit who told Chris where we hid his can of scotch?]. 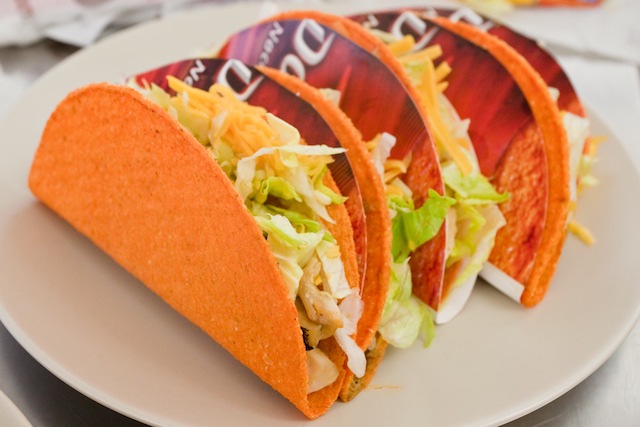 These tacos are decidedly more subtle than their Nacho Cheese brethren—with just enough zing to synthesize with the traditionally atrocious filling. Indeed, as one staffer put it, the Nacho version is "a dumbed down version of the real deal that you'd find in a bag," while the Ranch seems infinitely more complimentary.

However, several staffers noted that the shell is "paper thin" and "needs more thickness." Three of these delicacies are $5 (chicken costs extra!) so "shell-thickness" is probably not what's on the minds of the employees as they aim the Meat Hose and the Cheese Shooter at their targets.

When we asked for a vegetarian version of the Cool Ranch Doritos Locos Taco at the Union Square Taco Bell, we were told that they couldn't comply with the request. Quick fix: swirl one of their Loaded Potato Grillers around in a bag of Cool Ranch Doritos and see how long you can eat without sobbing.

#doritos locos cool ranch
#fast food
#taco bell
#why god
#original
Do you know the scoop? Comment below or Send us a Tip