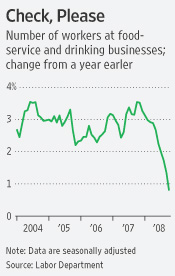 Recent data released by the Bureau of Labor Statistics shows how badly the restaurant industry is being battered by the recession. Eateries and bars shed jobs for five consecutive months through November, which is the longest stretch of downsizing since the government began tracking the info in 1990. 66,500 jobs have been lost since July, and George Prassas at the Labor Department tells the Wall Street Journal that the extended decline is "definitely something different than what the food-service industry's used to." To personalize the article (and bum everybody out), the Journal tells the sad story of one unemployed waitress on Long Island:

Dawnmarie Capuano, with 14 years of experience as a waitress, hostess and restaurant manager, was earning as much as $200 a night in tips between two jobs at an Italian restaurant and a pub.

In June, she noticed that fewer customers were coming in, and that parents were pushing children to order pizza instead of more expensive dishes like chicken parmesan. "Our regulars, who were leaving well over 20% [tips], they started going down to 15%," says the 41-year-old.

With her tips dwindling, she quit those two jobs in August and took a temporary office job that finished about a month ago. Since then, she has given her résumé to more than 60 establishments and gone on 20 interviews. The handful of job offers she has received didn't pay enough to cover the bills for the single mother of two. "I'm starting to get a little nervous," says Ms. Capuano.

Even worse off are immigrants; a study by the Pew Hispanic Center earlier this year showed that the industry ranks second for job losses among foreign-born Hispanics, right behind the construction industry. And on the other end of the stick are restaurant critics like Frank Bruni, who at least used his enviable expense account to assemble a helpful article on recession dining. He set himself the task of spending less than $100 (including tax and tip) on dinner for two at five Manhattan restaurants "of some ambition" and was pretty pleased with the results.