Dining And Drinking At Danny Brown 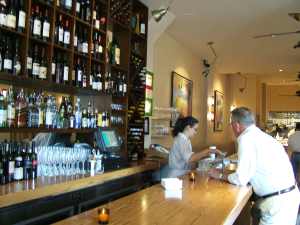 Gothamist finally made the trip to Queens to drink and dine at Danny Brown Wine Bar & Kitchen, a stylish spot that looks more SoHo than Forest Hills. Some of you may recall that this eatery located across the street from Councilwoman Melinda Katz's office caught the attention of Daniel Boulud back in May. The French megachef was steamed that Danny Brown, the chef-owner, uses almost the same lowercase "db" on its signage as Boulud's db bistro moderne.

When we asked Chef Brown what he thought of Chef Boulud's suing him over this typographical tempest in a teapot, he shrugged off our question with a "No comment," saying he had to get back to work in the kitchen. And we're glad he did, everything we lunched on that day was topflight.

Legal squabbles aside, one thing is certain. Danny Brown's is one of the only places on this stretch of Metropolitan Avenue where you'll hear wine geeks talking tannins with the well-informed bartenders. Since it was blazing hot outside, we started off with Vino Esmeralda, a refreshing Spanish white. It made a perfect early summer pairing with an heirloom tomato gazpacho. 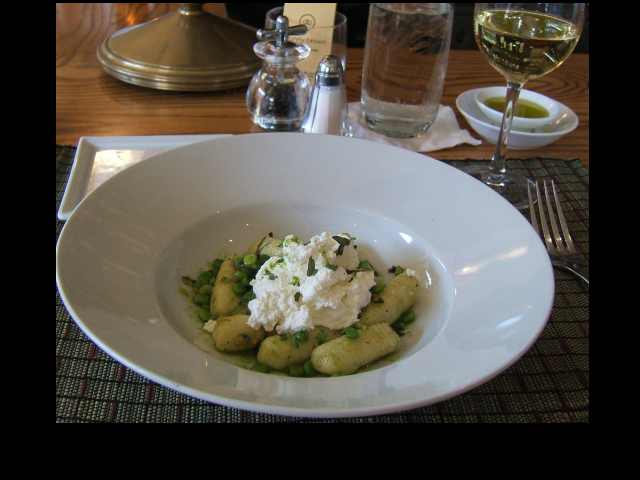 Taking the advice of a chap dining at the bar, Gothamist ordered a special of homemade gnocchi with English peas topped with fresh ricotta and mint oil. We're usually skittish about ordering these potato dumplings, since we've had leaden versions on more than one occasion. Not only were Danny Brown's dumplings light, they were downright creamy. So much so that they almost had the same texture as the fresh ricotta. A chef friend tells us that such ethereal lightness is achieved by using baking soda in the dough. While that may be, all we cared about was the end result, which was exquisite. Keeping in the vein of Spanish whites we drank a glass of Raimat Chardonnay, which had none of the heavy oakiness of its Californian brethren.

Even though lunch was relatively light, we decided to forego dessert only to return from the loo to find a small glass of Moscato d'Asti Bricco Quaglia set before us. At first we thought barmaid was trying to get us drunk, then we remembered that Danny Brown isn't just about the kitchen; it's also a wine bar.