[UPDATE BELOW] Sometimes a font is just a font. And sometimes it's copyright infringement. On their blog, Brooklyn Brewery is accusing Dallas pizza joint Eno's Pizza Tavern of ripping off their logo. They write, "It appears that Eno’s Pizza Tavern in Dallas, TX exhausted a great amount of energy and resources to develop an original logo for their business. Or perhaps they were drinking a bottle of Brooklyn beer and noticed that reflected in a mirror, a backwards B resembles an E? Either way, those smoke and mirrors don’t fool us!" And after flipping the Eno's logo around, we see their point!

Eno's seems to carry Brooklyn Brewery beers, and if they knew anything about the brewery would know this isn't the first time they've fought to protect their logo. In 2008 the brewery got into a dispute with Billy's Marketplace in Williamsburg for using a similar "B" in their logo, and brewery co-founder Steve Hindy said, “You would think they would understand you can’t just take someone’s logo." And a recent lawsuit between the LA Dodgers and Brooklyn Burgers shows people are serious when it comes to Brooklyn branding. 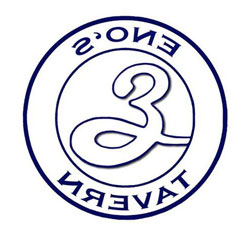 We've contacted Eno's pizzeria and Brooklyn Brewery for more on the matter, but BB recently wrote on Twitter "We're sending Monster down to Dallas right now to give them the swat-down. He'll take care of it for us." While we try to figure out which cat that is, here's a photo of Eno's logo flipped around. Does Brooklyn Brewery have a case?

[UPDATE] A manager at Eno's tells us this is the first they've heard of any logo problems, and that they have no comment at this time. But Marty Markowitz has an opinion! He writes on Twitter, "Eno's Tavern in Texas should 'do the right thing' and not rip off the Brooklyn Brewery's logo!"

For reference, the logo was designed in 1987 by Milton Glaser, who says it "was intended to produce a reference to the old Brooklyn Dodgers before they decamped for Los Angeles."

#brooklyn brewery
#copyright
#eno's pizza
#logo
#texas
Do you know the scoop? Comment below or Send us a Tip
A new Gothamist is coming! We’ve moved comments over to our beta site. Click here to join the conversation and get a preview of our new website.