Bad news for pizza connoisseurs across the city: the original Di Fara's location in Midwood was shut down today and seized by the New York State Department of Taxation and Finance over unpaid taxes.

The Midwood pizzeria, located at 1424 Avenue J, has two warrants for unpaid taxes over the last two years, totaling $167,506.75, according to James Gazzale, spokesperson for the New York State Department of Taxation and Finance.

An employee at the Williamsburg Di Fara's location confirmed the closure with Gothamist, and said she knew nothing else about it, adding that their location is "the same owner, but separate." The store has been owned and operated by Domenico DeMarco since 1964.

The Williamsburg outpost, located in a food hall at North 3rd Street, was still open as of 2 p.m. today. Di Fara also faces two additional warrants for unpaid taxes, totaling $163,520.02, according to the Tax website.

Marc Vaughan had just gotten to the Midwood restaurant around 12:30 p.m. today when he saw around 15 people hanging around outside the store. He watched as cops came and put the seizure sign on the door. "I drove an hour and a half from Huntington because of Dave Portnoy's One Bite Pizza review for my first time to try it," he told Gothamist. "It’s my one day off. I was just thinking, 'Of course this would happen to me.' Disappointingly laughing it off."

Di Fara is undoubtedly one of the greatest pizzerias in NYC if not the greatest. Not some new fangled place where kids with advanced degrees from Brown make pizzas, but old school where Dom Di Fara cuts the basil like that cause that's how you cut the basil.

The Midwood pizzeria briefly closed down earlier this year due to evidence of mice and other health code violations, and has had issues with the DoH in the past, as well. 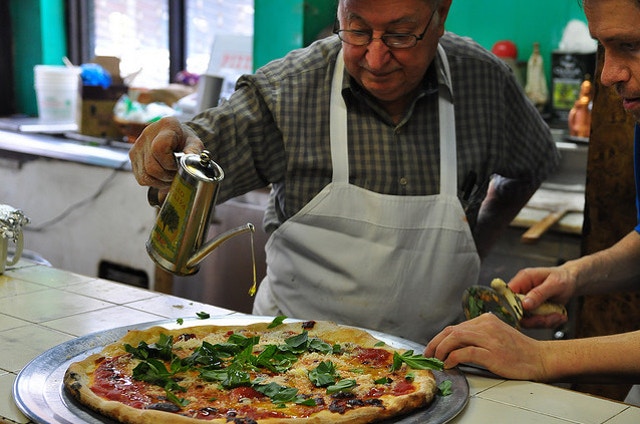 Back during his Mayoral campaign days, Bill de Blasio heralded the Midwood pizzeria as the best in the city (agreed!). The pizza comes in thick basic slices all topped with fresh basil (cut with scissors by DeMarco) and drizzled olive oil (and whatever toppings you choose. As we wrote in 2014, "Dom DeMarco, who's owned this delectable spot since 1964, stills mans the pizza station behind the counter, making a visit to Di Fara (and a long wait on a line) well worth it."

Earlier this year, another pizza legend, Grimaldi's, was also seized due to non-payment of taxes.

#brooklyn
#di fara
#midwood
#pizza
#pizzeria
#seized
#unpaid taxes
#original
Do you know the scoop? Comment below or Send us a Tip