Our latest installment of Quick Bites brings us to the West Village for Levantine dumplings.

THE VIBE
So many new restaurants open these days with menus that feel like so many others, that when a place pops up offering an entire array of dishes not usually seen in these parts, I get excited. And so it is with Kubeh, a week-old Middle-Eastern spot in the Village that specializes in, among other intriguing dishes, its namesake Levantine dumplings.

Kubeh takes over the old Charlie Mom space, though the only thing that remains from those three decades of serving Chinese staples is the restaurant's odd configuration, with sidewalk frontage on both Sixth Avenue and West 11th Street, but not the corner. There's take-out ordering just inside Kubeh's front door, along with a lunch-counter setup in the passage, which brings you to the main dining area. That space is a good-looking, sunny room with seating for about 40.

Owner and chef Melanie Shurka has decked out the place with all manner of Middle Eastern decor—platters, tea pots, urns, boldly-patterned fabrics—but it's all very tasteful and evocative rather than kitschy. The tables by the window are obviously the best, though the long communal number in the middle of the room could be fun if you get the right neighbors or have a big group sharing bites of spreads and mezes. The kitchen was running a bit slow when i went on Sunday evening, and the service was a little jittery, so you may want to wait a week or so if you need to dine in a hurry. 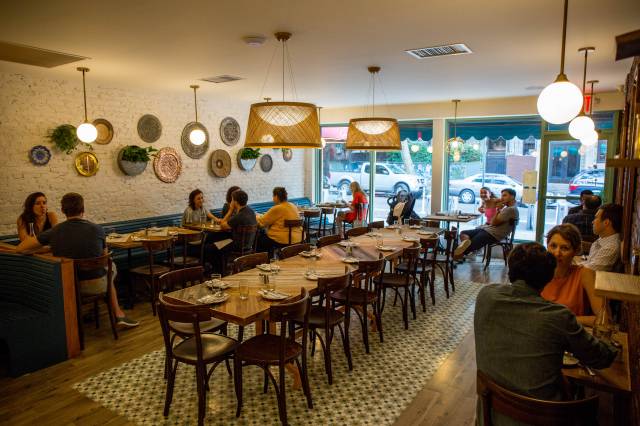 There are plenty of familiar things on the Kubeh menu (Hummus, Roasted Eggplant, Tabbouleh, etc.), but we mostly stuck with the dishes we had never encountered before, and enjoyed them all. The dumplings—the Kubeh—should be the centerpiece of your meal here. There are four varieties from which to choose, and four different "broths" (which are more like soups) in which they can be served. We somewhat randomly opted for the beef-filled Kurdish Siske in the beet-filled Selek broth; and the Syrian Lamb balls in a bright, lemony Hamusta. Both bowls were terrific, filled with bright, clean flavors and striking a satisfying balance between "light and refreshing" and "rich and hearty."

These aren't terribly large portions, so you will need to supplement your Kubeh with a couple of sides or spreads, and one of those should definitely be the Haricot Vert, a small pile of beans smothered in yogurt, sprinkled with nutty dukkah, and accompanied by several slabs of always-welcome grilled halloumi cheese. The Warm Cauliflower "small plate" was also pretty delicious, the sweet florets simply seasoned with sea salt, parsley, and lemon. Another solid option is the Tadiq, three cakes of the crunchy rice scraped from the bottom of the pot. It's really more snack than a proper side, but it tastes great dipped in your crock of fiery schug.

I didn't particularly care for the egg-shaped Fried Kibbeh, stuffed with beef and served with tahini—it felt overly heavy and one-note to me—but my dining companion and some friends at another table disagreed, so I'll leave it up to you. The only spread or meze we tried was a rather ordinary Muhammara, the red-pepper pita-dip too sweet for my tastes.

THE VERDICT
Kubeh has definite neighborhood-favorite potential, and the food is good enough to be worth a trip if a you're looking for something different for dinner. Possible bonus: the menu is highly vegan- and vegetarian-friendly. Plus, you have to respect Shurka for focussing on these generally-unfamiliar dishes, especially in such a high-rent setting. 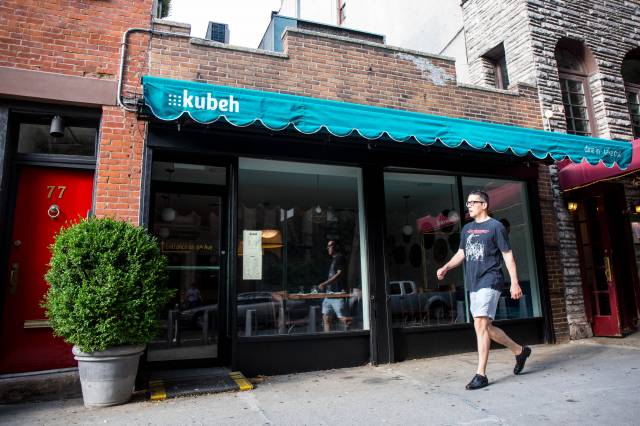