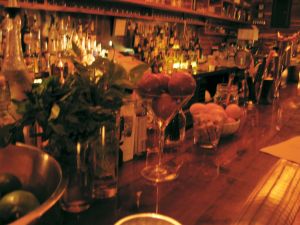 Soon after the New Year, the inviting little café formerly known as Chickenbone will be reborn as Dram. So named for the unit of measurement in the apothecaries' system, the south Williamsburg bar will focus on specialty pre-prohibition cocktails made with all-fresh ingredients. Managing partner Tom Chadwick – who currently moonlights behind the bar at Bushwick Country Club – told us that his vision for Dram involves bringing the fastidious cocktail craze, popularized by exclusive lounges like Milk and Honey, to a “neighborhood bar” atmosphere. “What Spuyten Duyvil is for beer, we want to be for spirits and cocktails.”

Dram will also feature a rotating roster of guest chefs who’ll concoct special dishes in the café’s tiny kitchen area; a regular menu of appetizers and cheese plates are planned too. The cozy establishment has retained its liquor license since Chickenbone closed in 2003 and stays active with a private supper club that meets about once a month. Chadwick hopes to continue the invitation-only supper club tradition once Dram opens, and promises regular live music as well. “We want a laid-back place where people from the neighborhood – not just the condo dwellers – can have the same quality of drinks and food served at more exclusive cocktail lounges.” Given Dram’s location in the shadow of a massive condo under construction just a few doors down, one hopes there will still be a few non-condo patrons left by the time the place opens.