Our latest installment of Quick Bites brings us under the Manhattan Bridge for decent food and a ton of atmosphere.

THE VIBE
Have you ever eaten dinner at Forgtmenot or Kiki's on Division Street? They're pretty fun, the food is satisfying, and the crowd better-looking and much hipper than, for example, me. The music is good, too, and the atmosphere is festive but chill, with a minimum of the desperate-to-have-an-epic-night crowd.

Now the team behind those two neighborhood/party spots hopes to replicate their success a few blocks away with a brand-new restaurant, 49 Monroe. And this time, among other new twists, the place is unexpectedly, delightfully, filled with greenery. There are well over a hundred plants taking root throughout the entire multi-level, nook-filled space.

49 Monroe is located across from Coleman Skate Park, that one under the Manhattan Bridge, and the building itself used to be a glass factory, so there are lots of industrial touches left intact. Between the out-of-the-way block, the dramatic decor, the semi-private tables, and the deep-cut soundtrack of hip hop, indie stuff, and oddities, it's pretty much the ideal spot for an early-on date with someone you're trying to impress with how cool and knowing you are. Especially if you're neither. 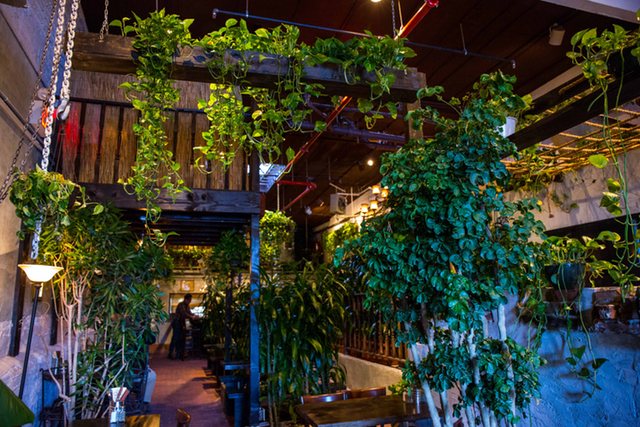 THE BITES
Somewhat surprisingly, the 49 Monroe menu plays it safe. There are a lot of basic pastas, some entree-sized salads, a bunch of standard-issue shareable appetizers. It's all relatively inexpensive, and most everything I ate there over the course of two dinners last week was fine.

My favorite was probably the Spaghetti and Meatballs, a dish I often crave but usually wind up not ordering, tempted away by something sexier. Here though, it's a star, maybe a bit sweeter than I prefer, but the pasta is cooked just right and the three well-seasoned meatballs offer plenty of beef in every bite.

The other "big plate" I tried, the Classic Burger, was skillfully prepared, the meat medium rare as requested and topped with generous amounts of melted cheddar and crisp-fried onions, but several tactical errors killed this beast. Specifically: the toasted brioche bun, which makes that already-inferior bread type almost sandy in texture; tomato chunks, rather than slices, which means everything's falling out all over the place; and—the real dealbreaker—truffle oil on the fries, which is just gross.

Both salads I ate were solid. The Nicoise had plenty of everything good, with four fat chunks of seared tuna anchoring the hard-boiled eggs (bonus points for the slightly-runny yolk), crisp green beans, olives, and bits of potato. A little more unusual was the Spanish Bean Salad, the strips of fennel and chewy chunks of chorizo offering a nice counterpoint to the canned corn kernels and black and red beans.

There are two desserts on offer here for now, and if you're in the mood for Crème Brûlée, you can order the 49 Monroe version with confidence.

THE VERDICT
49 Monroe seems certain to be as popular as its Division Street predecessors—they've really figured out the magical "cool-but-not-annoying-restaurant" formula—though maybe the slightly more obscure location will keep primetime walk-ins a possibility for a while longer. Go for the vibe, keep your food exceptions at about medium level, and you'll likely have a good time. 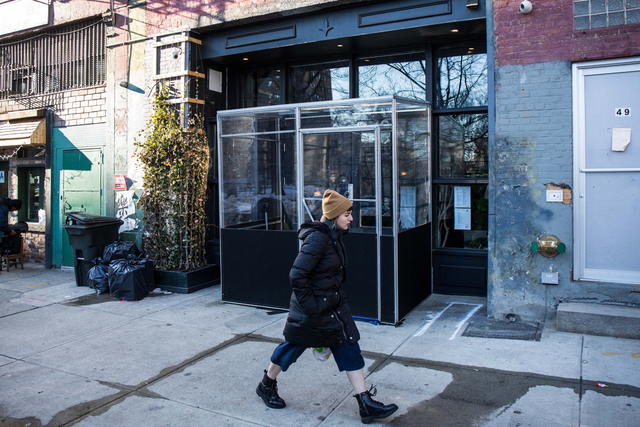 #49 monroe
#forgtmenot
#kiki's
#quick bites
#Two Bridges
#original
Do you know the scoop? Comment below or Send us a Tip
A new Gothamist is coming! We’ve moved comments over to our beta site. Click here to join the conversation and get a preview of our new website.