An impulsive social media post has touched off hostilities between two world powers, and there's no sense that a single diplomat on the planet can cool things down. Yes folks, I'm talking about the famous feud between Kendall Jenner and Baby's All Right.

The feud, which has somehow stretched out into another day, now involves accusations of lying and more deleted Instagram posts. This would have never happened if Monster Island was still open.

When we last checked in on the Williamsburg venue vs. celebrity model fight, Kendall Jenner claimed that she tipped in cash, after Baby's put her on blast for leaving the "Tip" section of her credit card payment blank this past Friday. But now Baby's All Right has dragged Nietzsche into the whole thing, in yet another deleted Instagram post that claimed Jenner was a liar liar thousand dollar leather pants on fire. 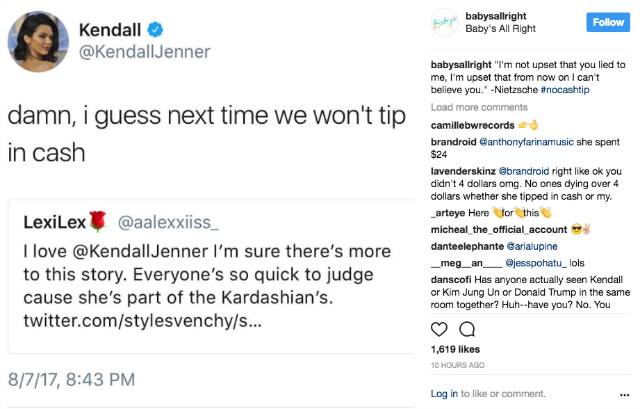 What would Nietzsche say about one of his famous Nietzscheisms being deployed in a fight between a model and a Williamsburg music venue? Shit I don't know, I barely passed the one college philosophy course I took. There's a reason I'm a handsome reporter guy and not a handsome philosophy thinking guy.

#baby's all right
#kendall jenner
#what is happening
#williamsburg
Do you know the scoop? Comment below or Send us a Tip