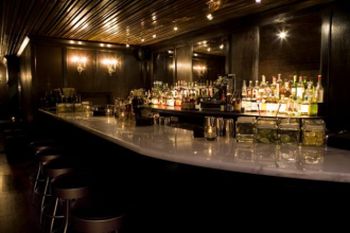 When The Villager broke the news that fancy East Village cocktail lounge Death & Co. would be temporarily shut down by the State Liquor Authority, no one was as publicly dismayed as Times restaurant critic Frank Bruni. In a blog homage to the elegantly dark nightspot, Bruni gushed:

There’s a drink on Death & Co.’s latest cocktail menu with bourbon and rye, along with Courvoisier and bitters. I may in fact have had it – or something quite like it – when I stopped by a few weeks ago. To be honest I’m not sure. It was very late at night. And I was very much off the clock. And the combination of not having to keep track of what I was ingesting and ingesting something that makes it difficult to keep track – well, it didn’t sharpen my powers of recollection. But I remember relishing the cocktails I tried that night. I remember being amused by the cool glassware, by the whole seductive fetishization of drinking.

Fetishists like Bruni can exhale; we spoke with owner David Kaplan this morning about the shutdown and were assured that the bar will be open to the public on Saturday (they’re hosting a private party Friday night.) He said the SLA shutdown was the result of a number of paperwork mistakes that the decidedly DIY owners made when originally navigating the Byzantine bar licensing process without a lawyer. As a penalty for the filing mistakes, the owners coughed up a $10,000 fine and agreed to stay closed for seven sobering days and nights.

Death & Co. has been operating under a temporary liquor license from the SLA since being cleared of a “laundry list” of invalid complaints from the local community board. Kaplan told us that an SLA investigation ultimately disproved the community board claims, which included allegations of noise complaints, “despite the fact that we’ve never had any noise violations,” and “bogus” claims that Death & Co. is within 160 feet from a synagogue, “we’re not – the business that was here before never would have gotten a liquor license if that was true.” It’s complicated, but Kaplan says “his understanding” is that the license renewal should go through in the coming months without another community board review – unless, of course, some other problem arises. (Note to Bruni – keep the noise down on your way out of the bar.)