Dear God What Unholy Creature Stirs Behind The Doughnut Plant?

Bowery Boogie has a disturbing report today about some sort of flour-based gremlin-like Pizza The Hut creature currently residing in a dumpster behind the Doughnut Plant location on Grand Street on the Lower East Side. And it's already amassed a loyal army of rats and pigeons! 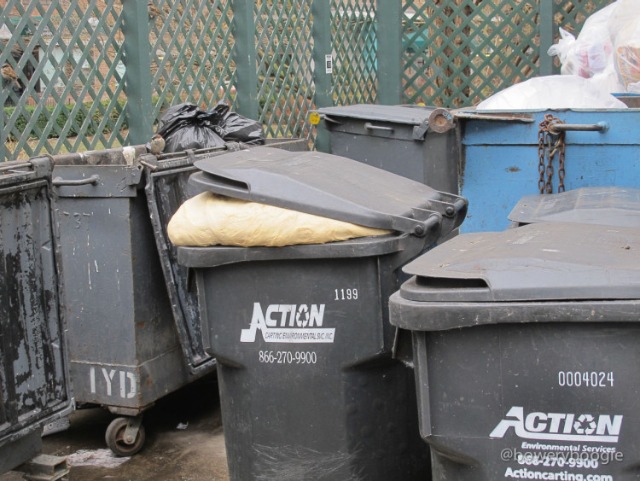 How long has this doughy monstrosity been making a home for itself there? Judging by previous Bowery Boogie posts on the subject, at least two years. Even if it's, say, self-regenerating every week or so, that's still a mighty long time for a company not to figure out this is clearly not the proper way to dispose of unwanted yeast beasts.

Here is a closer look at the creature, from when we decided to approach it after it appeared to us in a dream:

We've contacted both Doughnut Plant for comment and/or help finding a therapist who specializes in leavened nightmares.

#doughnut plant
#dumpster divers
#grand street
#Lower East Side
#monsters
#pigeons
Do you know the scoop? Comment below or Send us a Tip