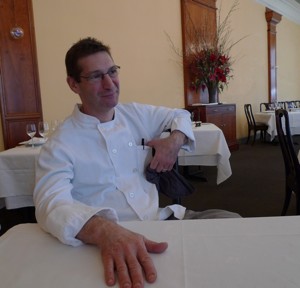 A picture of chef David Waltuck’s restaurant was on the cover of New York Magazine the week of December 31, 1979 with the headline ‘The Daring Young Man on Grand Street.’ Gael Greene wrote a review of the warmly lit restaurant Waltuck was frenetically running with his wife Karen, two waiters, and a lone potwasher inside a former bodega in SoHo. Chanterelle was two weeks-old. Waltuck was 24.

The restaurant was awarded its first 4 stars from the New York Times five years later. In a 1987 profile, Carol Lawson wrote the following: “In this age of the celebrity chef [Waltuck] is an anomaly, having built a success with a striking absence of personal fanfare.” The same sentence about the chef might as well have been written last week— before our interview took place, Waltuck was in his kitchen doing prep work, and had a bunch of battered rondeaus filled with different stocks and large braising pans organized across the burners. “I always get interview questions like, ‘Could you name some of the famous people that come to your restaurant?’” David Waltuck said last week, explaining his aversion to interviews. “And I say, ‘no.’” We asked about the food instead.

You're from the Bronx. I read that traveling into Manhattan when you were young propelled you towards this career? When I was a kid my parents would take my brother and I to the theater, and that always included a nice dinner around the Hell’s Kitchen area. A theater district French bistro—there are still some there, but there were a lot more of them in those days. It was the really the whole world of restaurants that attracted me to cooking, and I did a lot of cooking. I was really obsessed as a kid with food. I still am.

In the new Chanterelle book you write about going down to Esposito and Sons to pick up some pork skin for the cassoulet you were making. It must have been strange because there was no food television, really, to show you how to put meals together like you had never seen. You had to learn things differently because there wasn't a lot of cooking on TV. No, it was just Julia Child and Graham Kerr, the Galloping Gourmet. And little else.

So you didn't know how things were supposed to look or taste or feel. That's true. But I liked to try things in restaurants as much as I possibly could and I guess I had a natural feel for it. Everything turned out alright for me.

What are some of your favorite cookbooks? A lot of my original knowledge came from books. I'm the kind of person who's very obsessive, so I study things until the obsession passes. I love Richard Olney's books. He was an American painter who was living in Paris and then Southern France who wrote several cookbooks. Two great ones are The French Menu Cookbook and Simple French Food. They're old but they've reissued them in paperback. There was a whole series of books published in France by Laffont and they're all different French chefs, mostly Nouvelle Cuisine types. I probably stole a lot of ideas from there. And then whatever's out I like to see what's going on. I haven't used anything from it but I find Michel Richard's cookbook very appealing. Eric Ripert just gave me his book and I think it's very interesting, about the restaurant and how it runs.

What about your brother? Did he become a chef too after your early childhood exposure to French bistros? He's three years younger. He lives in Atlanta and he's a doctor. He doesn't have much to do with food world things, and he's actually a rather picky eater. There are certain things he just doesn't eat and when we were kids I used to pay him a quarter to try new things.

I used to work late and would visit your other restaurant Le Zinc before September 11, very late night. I don't know if you closed soon after that, but I know you closed for good not too long after that. We were closed for a while, then reopened, but couldn't make it.

Some of my favorite food memories were from there. Thank you. That's very sweet.

And at the new restaurant, Macao Trading Co., you're the executive chef? It's hard for me to chart the exact boundaries of the position because I don't own the place. I am running the kitchen. It's basically myself, a former sous chef, and a current sous chef. We’re consulting and running the kitchen. We hired the staff, trained them, did the menu, and we go there. It's not Le Zinc, which was fairly mello. Macao is more of a jammin’, three-deep at the bar kind of place.

There's this riff on colonialism at a few restaurants. [laughs] I hate to think of it that way, but I guess you're right. It was a Portuguese colony right next door to Hong Kong. And I'm really good with Chinese food— I should say I really like to cook Chinese food. Portuguese food is not something I know much about. I visited Macao twenty years ago so I'm sure it's very different now. The restaurant is really an imagining of food that has to do with Macao. 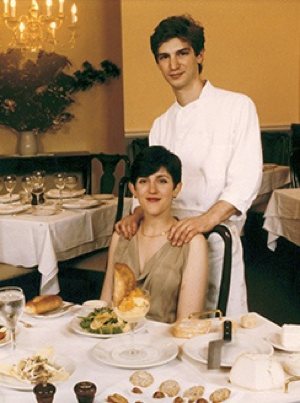 Gael Greene put you on the cover of New York Magazine with the headline A Daring Young Man on Grand Street, when you had just opened the original Chanterelle. We opened a little space in SoHo and we didn't have it all planned out. People started coming and the article came out six weeks after we opened, back in 1979. We were basically constantly busy after that, without a break.

And you didn’t have bus boys then at the restaurant, or now? No. We don't have food runners or anything either. Everyone in the front of house can explain the menu, do the table, serve bread and water, answer questions about wine - though we have a sommelier as well.

And he was just named Samurai of Sake. Yes. He didn't get a sword though. I was pretty disappointed by that. We designate captains among the staff but there's no difference in pay or uniform or anything like that. If possible we try to make them take the order. They could be captain one day and not the next though - it doesn't confer anything it's just a way of breaking up responsibility.

Did you go to a restaurant somewhere that had a similar system? No, I just think that when we started we didn't know any better.

I imagine you don't go out that much to eat. Is there a place you love to go when you can? I love all the great places but I get to there once every few years. Before we had kids we went Le Bernardin fairly regularly. Daniel, Jean-Georges. I really like Peasant.

Your restaurant is sort of the archetype for a lot of other restaurants that came after it and set the standard- You think so?

Yeah. Did you ever think about what would have happened to the American mushroom industry and culture if you'd named the restaurant Buttons? Or Hedgehog. Or Blue Foot or something. [laughs] The reason Karen and I called Chanterelle was that we wanted it to sort of sound French but not be French. We didn't call it "La" Chanterelle. Chanterelle is French and English at the same time. And I really like wild mushrooms. I don't know how much of an effect we had, I guess I'm pretty modest that way.

Do you have a favorite cut of meat? I like to braise oxtail. But it's much easier for me to tell you what my least favorites are. I'm not a big veal fan— I like the innards but not the meat so much. It's not very interesting flavor-wise. I put beef filet on the menu but I don't really like beef filet. Not to generalize but I think most chefs like fat and flavor. And salt.

Since you've opened you've had this relationship with artists. Cy Twombly, Keith Haring and Robert Mapplethorpe used to come in? Some of them were clients and said I'd like to do a menu, but most go through Bill Katz who's a friend of ours who curates it. He says, I think you should do this so we do. Even if they've never been here, if an artist does a menu for us then they’ll end up coming in a few times.

Were there any menus that Bill got you that were too controversial? No. One of the good things about having him as an intermediary is that if I know someone's not quite right I can just say, ‘it sounds like a good idea, but talk to Bill.’

[Many of Chanterelle’s past artist-made menus are on display at the restaurant. Waltuck gave us an impromptu tour; many of the same menus can be seen online here.]

Is that one by Bill Cosby? It is. Bill Cosby came in and was like, what's the deal with the menus? I want to do one. We said sure. He wanted to paint but couldn’t really paint so he wrote a story and we asked an artist in the neighborhood to do the drawing. Cindy Sherman was for a Quincy Jones benefit. This one is by Philippe Petit, a really good friend of mine- it's a chanterelle mushroom tied in the rope. We're friends and neighbors upstate so we try to get up there when we can. The Jasper Johns was for a birthday celebration for an art writer - Jasper would never do a menu for us but he did one just for that table.

Has it happened that a virtually unknown artist has done a menu and then became more well known? Depends on what you mean. Some are known in a certain realm. Like Virgil Thomson, he was a composer who did one of the menus that's a portrait in music of my wife. He's famous. I mean, he wrote two operas with Gertrude Stein but most people who come in here don't know who he is.

[on the way back to the dining room we pass a door that opens into the kitchen] You have Christmas lights back there in the kitchen. Yeah. It's a tradition. 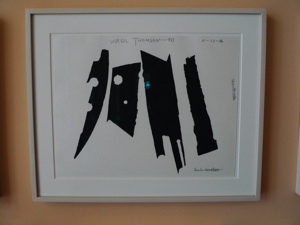 Can you share something unusual that's happened here? Lots of things have happened in 30 years. I was just talking about Virgil Thomson, which reminds me of this story: He was in his early 80s when I first met him. He was this curmudgeon-y guy and we hit it off really well. He'd always come straight to the kitchen and say, "Where's Papa? Where's Papa?" meaning me. And I'd say hi. Well, we threw him an 85th birthday party at the restaurant, just because we wanted to. We closed for the night for the party, and this was at the old place. We did his 90th birthday party as well. He didn't want a cake but we went ahead and made a huge chocolate cake that I put on a slab of marble. We put 90 candles on it and we were going to have two waiters carry it out to the dining room but this one waiter said, "I got it, I got it." So he carried it out and it just started to slide very slowly off the marble. There was nothing to do; everyone just watched in horror. It just slid right onto the floor, in flames and everything. Virgil was really happy.