Can we just agree that popsicles are the best frozen treat on earth? Okay. So when we heard there were some folks handmaking them from fresh ingredients provided by local farmers at the GreenMarket... our heart skipped a beat. David, Joel and Nathalie are the trio of geniuses who concocted People's Pops, and they can be found around town (track them on Twitter) selling their goods (which on any given day may include something like a Blueberry & Cardamom pop). Also, they will deliver. Say hello to your new best friends...

National Ice Cream Day is coming up, is there a National Popsicle Day? How would you celebrate? David: After Barack Obama is elected to his second term and the gloves come off, July 31st will be declared National Popsicle Day. The streets will be filled with break-dancers and unregulated popsicle eating contests.
Joel: Actually Dave, National Popsicle Day was outlawed along with prohibition in the late 30’s due to excessive brain freezes. The surgeon general declared popsicles a national threat to Americans’ well-being, thus turning possession into a class-A felony. As far as we know, this is still the case.
David: I heard they’re considering decriminalizing it in certain states.
Nathalie: Every day is National Popsicle Day, as far as I’m concerned.

Can you tell us a little bit about the business... how did you come up with the idea? D: During the summer popsicles basically sell themselves. The only problem was that there was no one selling good popsicles.
N: People’s Pops was just supposed to be a one-day event for the New Amsterdam Public Market last year, but we had so much fun that we decided to turn it into a business.

Where do the flavor ideas come from? D: We go to the GreenMarket each week and try to build flavors around the best produce that the farmers brought to market that week.

Is there a flavor you haven't tried to create yet that's been brewing in your minds? D: Blood, sweat & tears. 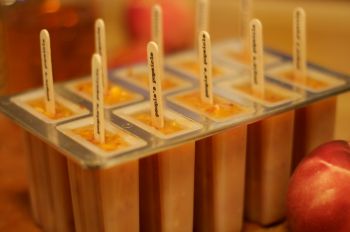 Is there an easy popsicle recipe you could share for people to make at home? D: Water & Red No. 4
N: Pour pomegranate juice and vodka into popsicle molds and freeze. Yum.

Please share your strangest "only in New York" story. D: Joel, I think your Dirt Man story is the best printable “only in New York” story that I know.
J: I was just riding my bike in the West Village one day and a cab swerved across three lanes of traffic, almost killing several people. A woman jumped out pointing and running towards me, I was about to fearfully pedal away when she yelled, “I’m producing a Mini Cooper photoshoot, and want you to be in it!” Bing bang boom:

Given the opportunity, how would you change New York? N: I would move it out of the city.
D: Replace the subways with rollercoasters.

Under what circumstance have you thought about leaving New York? N: Pretty much every morning when the alarm clock goes off. Don’t print that.
D: I usually spend every January - March plotting my escape from NY, and every April - December happy that I stuck it out.

Do you have a favorite New York celebrity sighting or encounter? D: Emily Gould and Doree Shafrir stopped by the stand last weekendI thought that was pretty cool. My first celeb sighting in NYC was Kevin Bacon on the UWS. The first thing I recognized was his voice, but I wasn’t sure if it was in fact him until he was less than a foot away from me. He was pretty well disguised using that Bernie Madoff, vampire look: collar popped, hat down. I also saw Bob Saget at the Apple Store in SoHo a few years ago while I was skipping work.
J: Ana Gasteyer bought pops from us! So did the guy who played Colin Powell in that recent Bush movie (Dave you remember right?).
D: My memory of that event is locked in a man-sized safe.

Best cheap eat in the city. J: David’s Bagels on 1st and 19th or the halal cart on 1st Ave and 11th st.
N: Dumpling House on Ludlow or a little sleeve of Oreos from the bodega on 4th and C
D: “Spicy Classic” from Nicky’s Vietnamese Sandwiches in the East Village ($5) or the “Spicy Special” from the bodega on the corner of 109th and Amsterdam ($4) 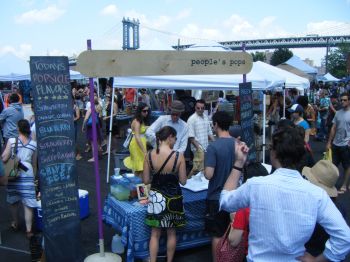 Andy finally, if I can’t make it to the market this weekend, do you deliver? D: Yes we do. Our minimum for popsicle delivery is 15 popsicles for $3.50/pop with a $15 delivery charge. Delivery is free for orders over 25 popsicles.

We’ve catered a few media/fashion events this summer and have a few more lined up in July and August. For larger events you can not only buy our popsicles, but can rent one of our push carts and turbo-friendly servers. We’ve also been delivering popsicles this summer to office parties around the NYC area, and are even making a delivery to a private BBQ this upcoming weekend.

If you have an upcoming event, or are just fiending for your popsicle fix, shoot us an e-mail and we’ll work something out with you.