David Chang's delivery-only restaurant Momofuku Ando—not to be confused with the David Chang-backed delivery-only restaurant Maple—is officially live in Midtown East. Users who signed up for advanced notice were directed to download the app (of course) this morning to get Chang's latest creations delivered to their desks and couches. Fried chicken at the touch of a button? Dangerous.

There's a NYC Cheesesteak ($12) with cheese sauce, onions, cherry peppers and Chickpea Hozon, the Chang invention he's using to make the pasta sauce at his other new eatery Nishi. The other two entrees are an enormous Fried Chicken Box ($11) with honey mustard and coleslaw and The Ernesto ($10), a roasted pork sandwich with curried mustard, sauerkraut and muenster cheese.

There's only one side for now, a Baked Potato ($4) that reads like an entree—and maybe it is. It's loaded with a black pepper sour cream, capers, pepperoni and vinegar chips. Christina Tosi has created a few new special desserts, including three different mini cookies ($3.50 for three): The Choco Chip, The Shoop (sugar cookie with salt and pepper) and The Ritz, made with buttery crackers. JJ Basil, Ando's culinary head, also developed a hibiscus and pomegranate donut ($3). 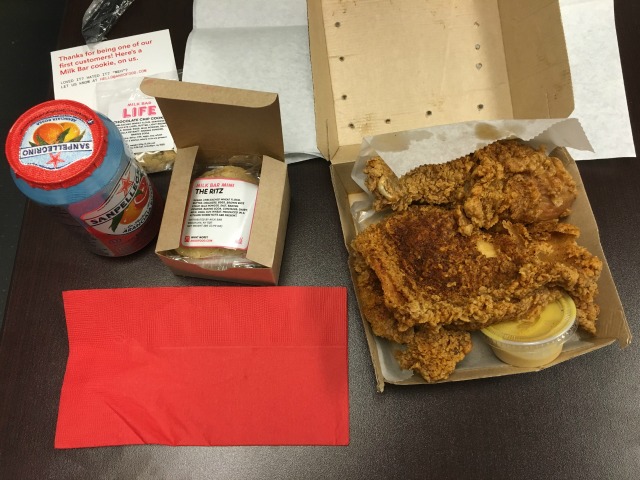 Gothamist's Dan Dickinson took Ando out for a test drive already and reports back with positive findings. First, it's quick. Really quick. Dickinson placed his order at 11 a.m. on the dot; by 11:03 a.m., his order had been prepared and by 11:07 a.m. it was out for delivery via UberRush. By 11:13 a.m., he was devouring a "huge, wonderful, incredible" serving of fried chicken with "a little bit of spice to it" and a "solid" honey mustard.

Chang's other delivery investment, Maple, has been well-received since launching last year and Chang's mastered the quick-service model with his growing Fuku fleet. This new option feels like a marriage of those two concepts, and one that could be easily replicated in other neighborhoods, which feels like a likely direction for the ambitious chef.

For now, it's just Midtown East getting the taste, Monday through Friday from 11 a.m. to 2 p.m.