Even the most die-hard carnivore would not be able to tell that the scent wafting through the air at David Chang's newcomer Momofuku Nishi did not come from an actual hamburger sizzling on the grill. Chang, owner of the Momofuku Restaurants, expertly prepared a crowd of eager media folks what appeared to be a traditional hamburger, but was, in fact, entirely vegetarian. It even "bled."

When Chang opened his first restaurant, Momofuku Noodle Bar, in 2004, he famously declared that none of his dishes were vegetarian-friendly, but in the past 12 years he's had a change of heart. After creating many vegetable-based dishes, he's finally making a typically meat-based dish but without any of the meat.

Chang paired up with Patrick O. Brown, M.D., Ph.D, and CEO of Impossible Foods—a company that produces all natural, plant-based "meat and dairy"—to create the new Nishi burger, which is designed to taste and look just like meat, right down to that "blood."

Chang told Gothamist, "As a chef, I want to make stuff that is interesting and delicious and those are the products that we want to work with. So when I tasted [the Impossible Burger], I only want to support stuff that I think is ultimately extraordinarily delicious. And that's what sort of blew me away." 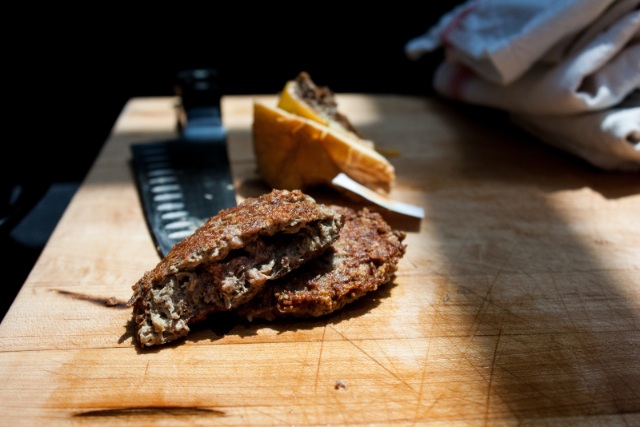 The ingredients in the Impossible Burger can easily be found in any restaurant kitchen, says Brown. They include water, wheat protein, coconut oil, potato protein, and natural flavors and micronutrients. The so-called magic ingredient is leghemoglobin, or heme, which is a molecule that's found in both meat and plants and was discovered by the team at Impossible Foods. It's what makes the patty look, smell and taste like actual meat.

Food science aside, the burger really and truly does taste like meat. Though slightly lighter in texture than the burgers you're used to grilling up on the Fourth of July, it's salty, chewy and has that nice umami flavor you're looking for when craving meat. As someone who lived on Morning Star frozen veggie burgers in college, this isn't in the same realm as those processed, stiff slabs of conglomerated vegetables (which I'm not even sure are actually vegetables).

Brown, along with his team of scientists, spent five years working to perfect the Impossible Burger and make sure it was an actual meat replacement that meat eaters would love. He estimates that it cost around $80 million. Luckily for them, the company is backed by the likes of Bill Gates, Google Ventures and UBS.

"We wanted to work with David in part because he has such talent in making awesome meat dishes and meat lovers flock to his restaurants," said Brown. "The customers that we care most about are people who love meat. That's obviously what our mission is all about, is making a plant-based product that meat lovers will love and you can't do better than having David Chang prepare it." 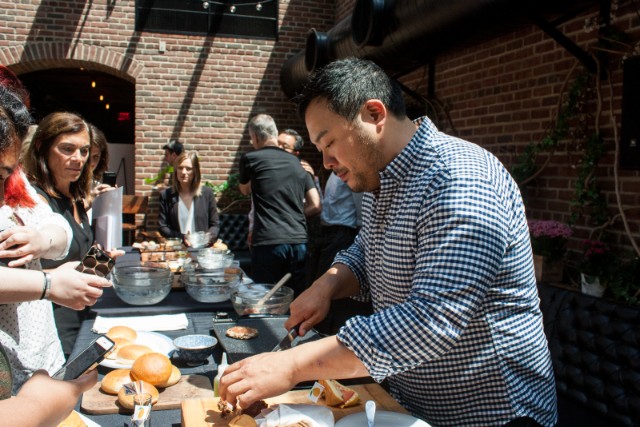 The burger will debut at Momofuku Nishi on July 27th at noon and will not cost $80 million but rather $12 including a side of fries. It will be topped with romaine, beefsteak tomato, pickles and special sauce that tastes like mayo and ketchup with something extra, which Chang says is fermented and plant-based though he can't reveal what it is, all atop a Martin's potato roll. Cheese is optional.

Brown says that the raw meat will eventually be sold in grocery stores for the comparable price of organic ground beef, but he hopes to eventually sell it for the same price as conventional ground beef.

The goal of Impossible Foods is to create food that has less of an environmental impact, is part of a healthy diet and is affordable.

It is a satisfying and environmentally-friendly alternative to the heavily-processed and often terrifying ground beef sold at grocery stores. It might even get the Ron Swanson seal of approval—just don't tell him what's actually in it.

#david chang
#impossible foods
#momofuku nishi
#vegetable burger
#veggie burger
#original
Do you know the scoop? Comment below or Send us a Tip