Though it was one of the pioneers in the delivery only restaurant movement in NYC, David Chang's pet project Ando has now transitioned into a more traditional brick-and-mortar model, opening as a fast casual breakfast and lunch spot on 14th Street. Earlier this year, the Ando team brought on a new CEO, Andy Taylor—former Pret A Manger and Hale & Hearty COO and CEO, respectively—to guide the project to success, leading to the format switch from a hidden kitchen to a storefront business.

"The more I understood the business and then looked at the economics that a pure delivery-only model wasn't viable, mainly the logistics part of it—as soon as that became [clear] to me I approached David Chang and the board," Taylor told Gothamist.

The new Ando will still offer delivery to much of the same swath of Manhattan that it did when it operated a kitchen on 53rd Street. Now, though, they'll be able to employ an order ahead/pickup model, in addition to retail and dine-in customers.

Walk-in diners are greeted with grab-and-go refrigerators stocked with salads like The Powerhouse, packed with chicken, veggies, dried cranberries and feta, and the Ginger Kale Salad, a vegan offering with marinated chickpeas, both of which were available when Ando was delivery-only. In fact much of the menu, which includes the Hozon Cheesesteak and its vegetarian counterpart, will be familiar to regular Ando orderers.

"The menu was tight because it was delivery and because of the model, but when we were opening retail, I wanted to keep it that way," Taylor says, acknowledging that other fast casual business have been successful by doing a few things well and finding their own markets. 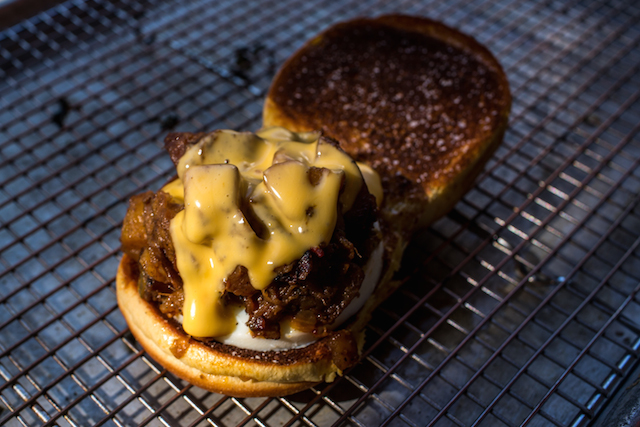 The big new ticket: breakfast sandwiches. Available only if you go to the restaurant yourself, the new Ando will serve three BEC-type offerings including a Sausage, Egg & Cheese ($5) and a Bacon Hash, Egg & Cheese ($5), plus a vegetarian sandwich, The Breakfast King ($5), with egg whites, king oyster mushrooms, kale and swiss cheese.

"I do think it's replicable," Taylor says of Ando future success and expansion. "Where and when we do that I don't know. We're kind of focused on making sure this one works, but I don't see any reason why we couldn't open in other locations, especially with a delivery arm of the business."

He also believes the delivery-only model could thrive in the future once people understand how a business like that works.

"I do think there's still a little bit of customer resistance to food just appearing out of thin air via an app for some people," Taylor muses. "People like to feel secure, especially with food; food's an emotional thing as much as a physical thing and we want to see the place its made and see the staff and feel it. I think over time people get more comfortable with that. To use the example of Uber, if I'd said 10 years ago you would press a button on your phone and then get in a stranger's car that appears a minute later you'd think I was crazy. Now it's part of everyday life."