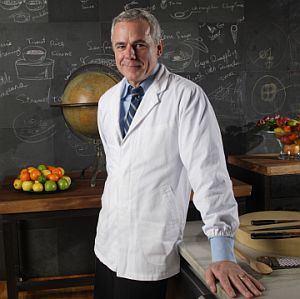 David Bouley, the acclaimed chef from Connecticut whose eponymous restaurant brought four star dining to Tribeca in the '80s, has a lot on the stove these days, as his big plans to expand his culinary empire in the neighborhood are finally coming to a boil. Sometime in the next month or so, Bouley expects to relocate his flagship restaurant to 161 Duane Street, where a Renaissance ambiance, replete with stone from Versailles, awaits his flock. Two of his other restaurants, Bouley Bakery and Upstairs, will be shuffled around to fill the old Bouley space, and his Viennese-inspired restaurant, Danube, will be replaced with a new French restaurant sometime next year.

And if that still isn't enough Bouley for you, don't sweat it; next fall he plans to open an innovative new Japanese restaurant on West Broadway called Brush Stroke, which will itself house three different eateries. What this means is that at some point in the future, you could conceivably have a different Bouley dining experience on each night of the week, and all in the same neighborhood, recession permitting. Maybe some frequent-eater punch cards are in order?

So you just got back from Japan? Yes, I’m dealing with the jet lag.

You were there regarding Brush Stroke? The minister of fishing and agriculture flew me over to be a speaking representative of Japanese food and products outside of Japan. I had to speak in front of 800 people about how we can get more high quality products from Japan.

That’s one of the things Brush Stroke’s going to be doing, right? Yes. The art of Japanese kaiseki cooking has never really left Japan; those chefs who do it stayed there because we can’t get the products outside of Japan. We’re just starting to get the products now; there’s a greater commitment now to getting all the vegetables and rice and higher level products outside of Japan. But unless you visit Japan you don’t really know what Japanese cooking is. A chef in Japan is part of the professional class, unlike here where it’s blue collar. In France it’s professional as well; you have to be certified. But in Japan 80% of food is cooked; just 20% is sushi and sashimi. So we’ve been enjoying that and a few things from the grill like at Benihana, but the whole art of kaiseki cooking has never really been developed outside Japan.

Is that something that’s going to be taught at Brush Stroke? No, no. New York Magazine doesn’t seem to really get their act together. They continue talking about a cooking school; we don’t have a cooking school. It’s basically a restaurant on three different floors. The basement will be a bar and grill with French sauces. The first floor will be sushi and the second floor will be a kaiseki room where a cooking school called Tsuji Culinary Academy will be my partner in this project.

That’s where I get confused, because you’re bringing in a Japanese cooking school but there’s no teaching at Brush Stroke? Yoshiki Tsuji is a friend of mine. The school is 50 years old this year; it’s the biggest cooking school in the world. He is not interested in opening a cooking school here; they only teach Japanese people. But now the world is interested in Japanese cooking and there’s a huge desire for Japanese graduates from the school to go everywhere and cook. His interest is to create a restaurant relationship with me so that this can develop into a curriculum or graduate school program for his students who eventually want to cook outside of Japan. There are 430 professors at the school and there will be three rotating through the restaurant every year and a half and three in Osaka as back up for coordinating ingredients and recipes.

And while you were away in Japan Brush Stroke’s liquor license got approved. There was a lot of drama about that but then the Community Board finally approved it. Well, you know… [Laughs] It’s just amazing what people have a palate to write stories about these days. There were two advisory boards, which are small groups of people. And one of the ladies in that group is a problem for us at one of our restaurants, which she lives above. She used to be the co-op board president of the building and she was basically irresponsible in her obligations to us and she lost her position as president because she wasn’t doing what she was supposed to be doing. She wasn’t happy about that and she’s been trying to create a problem for me ever since. So this small advisory board goes into the full board committee which is not emotional like she was. Even though we had an almost balanced vote with the small group of people, when we got the full board the vote was thirty positive and five negative. She actually went down on her negative vote from six to five and we went from four to thirty positive.

How long have you been in Tribeca? 25 years now.

Do you live in the neighborhood?
No. I used to live here and I may move back.

Having been involved in the neighborhood for so long, what’s your opinion of what it’s like now and where it’s headed? Well, you’ve seen what we’ve gone through here in Tribeca. Who knows where we’re going? Tribeca’s a different community than when I first started here. There were no stop lights and a small percentage of folks living here. It’s a different world. All our customers in those days were reservation folks who made a commitment to come down; we didn’t really have any walk-ins. I continue to love Tribeca, though I’ve been going to Brooklyn a lot because of the new Bouley; a lot of the artists and stone cutters are in Brooklyn and I’m starting to fall in love with Brooklyn, particularly down by the Navy Yard. It reminds me of what Tribeca was like here in the early ‘80s. There’s not as much of a rat race as other parts of the city.

But Tribeca is a great place now for the level of Japanese cooking, the kaiseki cooking, that we’re doing at Brush Stroke. The second floor will be a long 14-20 course tasting menu, and we have to spend more for the kinds of fish and products we’re getting, so obviously the meal itself will cost more. It will be compatible to what you could get in Kyoto, where they cook seasonally and serve the dishes in very specific order. It’ll be the kind of place you’ll come for a celebration, while the basement level is a place where you can drop in for a beer and still appreciate the ingredients.

How are you going to achieve that?
Last week we met with the Department of Agriculture and we’re trying to get teams together to work with different officials here. The ground here is better than California for what they want to do with the quality of the food, because of the climate. So we’re organizing some of the farmers to grow the food here. We’ve done this with other vegetables and we’d like to do it now with some of the unique vegetables from Kyoto. And the government of Japan is subsidizing a new foundation called Japanese Restaurants Abroad to help facilitate this effort.

What makes Kyoto food so special? Kyoto has the best cooking because it’s evolved in a tight community. And they’ve sheltered their techniques for centuries. Now they want to get out there and teach people about the ingredients. They have turnips and eggplants and different kinds of greens that would be shocking to see what other cultures would do with, like French and Italian. These eggplants are so sweet you can almost eat them raw. A lot of this program has been developed by the Japanese culture because of the growth of China; the government wants to educate the world about who they are before they miss an opportunity. Kyoto chefs have been training top French chefs and 27 Kyoto chefs came here and did demonstrations at the French Culinary School. The Agriculture Department is working with big feed exchanges and Cornell so that in the next few years we’ll have these ingredients that had only been available in Japan. They’ll be in Japanese restaurants and in the market, so it’s a great thing for everyone.

You’re also participating in this contest where one person who opens the April issues of Gourmet, Bon Appetit, or Domino Magazine will find a winning envelope entitling them to dinner at an exclusive Paris restaurant with you. Mastercard and Conde Nast has put together a very exciting opportunity for people to come and have dinner at my new Bouley which will be opening in the next few months; I’ve been building it for a year and a half. It’s across the street in the Mohawk building. I’ve going to be living above the kitchen at some point. I’m going back into the kitchen like I was from ’87 to ’96; this is a new launch for me. I feel like I’m going to be delivering a new and exciting dining experience, like what we planned to accomplish in ’86 and ’87. And we went beyond our dreams. In the last three years of the original restaurant we had 29 out of 30 in the Zagat and there hasn’t been one 29 out of 30 since we closed that restaurant in ’96. So in a way this energy and design is going into the new Bouley that went into the old Bouley in ’86.

So winners of the contest will come in and have a meal with me in the new Bouley and then we get to eat together in Paris at my favorite restaurant, L'Astrance, which has three Michelin stars. The way they cook is very unique and healthy and the chef has an interest in the Japanese diet and knows a lot about the health values of Japanese cooking. For instance, when he orders a fish he just orders 10 kilos of "fish" and they send him whatever is freshest and he makes the menu around that.

And what happens if the winning envelope sits in a magazine in a dentist’s office for five years before someone finds it? You know, I asked that question too. I can’t remember what they said to me but I think they sorted it out. Maybe they’re tracking where it is.