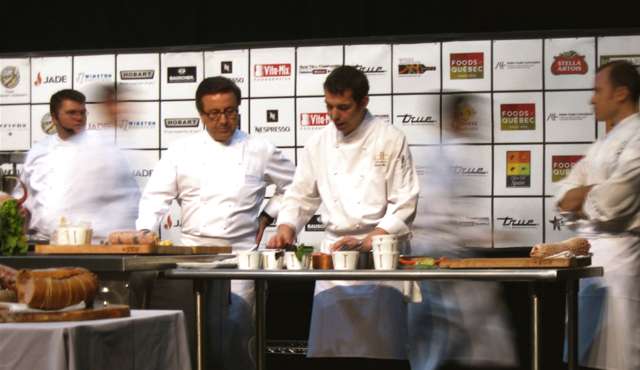 Boulud and protégées cook onstage, some at the speed of light.

On day three of the StarChefs ICC, Daniel Boulud spoke about his two American chef de cuisines: "Sometimes Damian (Sansonetti) and Jim (Leiken) cook better French food than me!" This got some laughs, especially from the French cooks in the audience, but evidence suggests that Boulud was being sincere.

In an era when some star chefs running global restaurant empires prefer to keep the chefs running their restaurants locked away like spatula-handed Rapunzels, Boulud pulled the executive chefs from his NY restaurants at the Congress to show them off. Photos and miniature biographies of each one flashed by on the projector screen as Boulud introduced them, explained how they'd met, and how long they'd worked together. As Boulud talked, the team broke down a pig, French-style, and cooked some pork.

Most chefs don't like to share the credit like this, so it was especially cute when Boulud described Olivier Muller as a man who "weaves the soul of Alsace into the soul of Lyon" at the bistro-- Boulud is from Lyon, and his inspiration is often classic Lyonnaise food. Then Boulud's charcuterie whisperer Sylvain Gasdon came out onstage with some terrines and sausages.

Finally, Boulud introduced his parents, who both recently turned 80, and were in from Lyon. During the presentation they sat front and center just to watch (they don't speak English) their son talk about mentorship, head cheese, and his quest for "high quality middle intestine sausage casing." The whole thing was strangely touching.