Our latest installment of Quick Bites brings us to a Dale Talde sports joint in Brooklyn serving up Chicken Pot Pie Ramen.

THE VIBE
At first glance, there is little to distinguish Atlantic Social from what I imagine all of the other sports barstaurants in cities and strip malls across America to be like. In fact, several people far more well-traveled than I have already compared the feel of the place to an Anytown Applebee's. But here's the crucial difference, the reason why even non-sports-bar folks might get excited about the spot: Atlantic Social is a Dale Talde joint, the one-time Top Chef whose other ventures include his namesake Park Slope mothership and Manhattan's Massoni, home to some of the city's most sublime square pizzas. But can Talde and longtime partners David Massoni and John Bush bring something new (and delicious) to the man-cave scene?

The exterior is an unpromising start: an anonymous, tinted-window storefront at the base of a bland new luxury residence, up against a stretch of Atlantic Avenue that's more highway than pedestrian boulevard. Barclays Center is across the street, but police barricades and construction pits currently make it unlikely that one would stumble upon Atlantic Social unwittingly, either before or after an event at the arena.

There are three main rooms inside. To your left is a large wrap-around bar area with about ten TVs, a mishmash of sports memorabilia and general nostalgia, lots of standing room, booths, tall tables, and a few cool-looking raised banquets. To your right is the dining room, with crammed-in tables along one wall, Edison bulbs dangling over communal seating in the center, and a number of booths tucked in wherever possible. Finally, there's a windowless "game room" in the back, with Buck Hunter, shuffleboard, NBA Showtime, taxidermy, a pair of leather couches and a huge gas fireplace, which was roaring on opening night even in the 50-degree weather.

The plaid-clad staff is plentiful, friendly, and organized. The music is well-chosen, often a deep-cut mix of indie rock and hip hop. If you like this sort of place, you will definitely like this specific place. 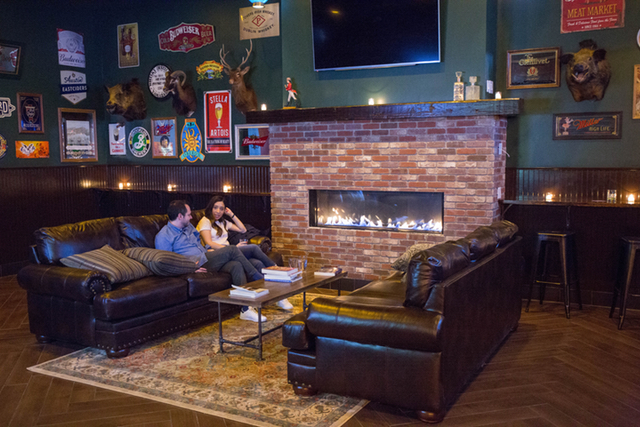 THE BITES
Does the food warrant a visit if you're not a sports-fan? Absolutely yes, as long as you get one or more of of the four pizzas on the menu. Full disclosure: I did not try any of the pizzas here, but was repeatedly assured that these are the same chewy, cheesy-crusted, loaded-up pies they serve at Massoni. And really, even if they're only half as good as those beauties, it's great to have them available somewhere other than a boutique hotel in NoMad.

The rest of the menu, which is all over the place in terms of cuisine, is a bit more hit or miss. The Nachos were good, served on a tray to ensure complete coverage on all of the thick, crunchy chips. The toppings may be Taco-Salad basic—ground beef, cheese sauce, chunks of tomato, grated cheese, raw onion, and enough jalapeños to give it some kick throughout—but it's a satisfying way to start things off if you're with a crowd.

The Potato Skins Bravas are more unusual, and they might have been my favorite thing I ate over the course of two big meals. Here chunks of baked skins are covered with spicy chorizo, sharp manchego, intensely fishy boquerones, a sprinkling of marcona almonds adding some crunch, and a spicy mustardy sauce tying it together.

Another playful dish, Chicken Pot Pie Ramen, was less successful, and mostly made me wish I were eating one or the other instead. The Atlantic Social Cheeseburger is decent, with two juicy patties, gobs of melted American, and strong pickles on liberally seeded bun. The accompanying fries served their function as palate cleansers between burger bites, but I wouldn't order them as a straight-up side.

Of the two sides I did order, the one I'd get again was Crispy Brussel Sprouts, nicely charred and caramelized and packed with almost-earthy flavor. The Buffalo Cauliflower With Blue Cheese was too soggy and drenched in oil to recommend.

THE VERDICT
There are so many massive new residential buildings in various stages of completion right near here, and all of those newcomers could do a lot worse than making Atlantic Social their local. Most of the food is solid, the pizza is excellent, and the atmosphere conducive to a wide range of crews and situations.

#atlantic social
#dale talde
#quick bites
#original
Do you know the scoop? Comment below or Send us a Tip