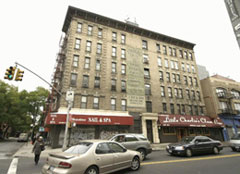 19 Kenmare Street has been vacant now for over a year, and what's housed behind the plywood in what used to be Little Charlie’s Clam Bar, isn't a rock legend-run nightclub. Just this past Wednesday, prior to a community board meeting regarding the spot, the Bowery Presents folk (whose Bowery Ballroom venue is just down the street) emailed their list of contacts asking for support of the restaurant, Travertine, hoping to open there (on top of their cursed address, the restaurant has been traveling a long and tortured road).

Bowery's Michael Swier added, "We want to encourage new, well-managed restaurants to open in the community so that our guests will have a place to eat both before and after shows." Now Grub Street reports that the restaurant did in fact get the nod, albeit barely, at the meeting last night where the co-owner was hissed at. But Eater notes that some weren't as lucky. Beatrice Inn, for example, was denied a liquor license renewal...what will Mary Kate do?!