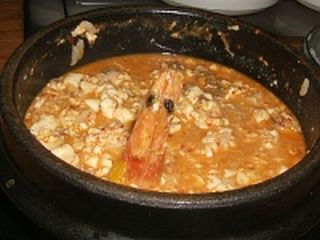 Even though winter’s barely a week old, many folks in the city have come down with a doozy of a cold, perhaps due to the sharp temperature drop that marked the end of an otherwise moderate fall. Our nasty respiratory bug is finally on its way out, largely because we’ve been treating it with a variety of potent soups available in Queens. Whether you're sick as a dog or just in need of a warm up, solace can be found in these hearty soups and stews.

Two days ago, we felt like death warmed over. So out came the big guns: namely soon doo-boo jji-gae, or Korean silken tofu stew. Our go-to spot for this protein and spice packed stew is Sunnyside’s Book Chang Dong. As you enter, peer into the glassed-in kitchen and watch stone bowls of tofu stew boiling away on a stove that looks hotter than a blast furnace.

The black minicauldron of spicy soon doo-boo was still bubbling away when it landed on the table. While the heady concoction cooled we cracked an egg into it and munched on some raw garlic and kimchi to enhance our meal's curative powers. Clams, shrimp, mussels, beef and mushrooms make for a head-clearing mix when combined with nutritious homemade tofu and plenty of red pepper. Order the very spicy version at your own risk; the chili level borders on painful. 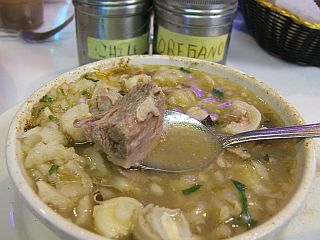 The following day's lunch found us feeling much better and called for something lighter but no less therapeutic: matzo ball soup. So we headed over to Ben’s Best in Rego Park for a bowl of Jewish penicillin. The matzo ball was feather light and the broth was wonderful. Energized by Cel-Ray, soup and brisk winter air we embarked on a day of holiday shopping. By evening, our deli-fueled winter romanticism had frozen over and we were hell bent for a restorative meal.

We immediately set a course for Jackson Heights, specifically Taqueria Coatzingo, which makes a mean pozole. This pork-laden hominy soup sure ain't kosher, but it's hearty as hell. The broth teemed with gigantic white corn kernels and chunks of pork that brought to mind hunks of cord wood. We doctored it up with a heap of raw onion, a generous squeeze of lime and a good shake each of cayenne and oregano. The soup came with the usual suspects: a duo of tostadas topped with refried beans, cheese, and shredded lettuce and tomato. We barely touched the crunchy disks and focused on the main event's hunks of pork – though wondering why some bits had been left with a ring of fat. Quickly realizing that the lustrous white fat had been left on deliberately, we opted to save these bits for last, allowing their porcine goodness to flavor our pozole to the very end. As of this writing, we're feeling better already.

#As
#death
#food
#guns
#In the 'Hood
#queens
#restaurant review
#restaurants
#soups
#sunnyside
#the city
Do you know the scoop? Comment below or Send us a Tip