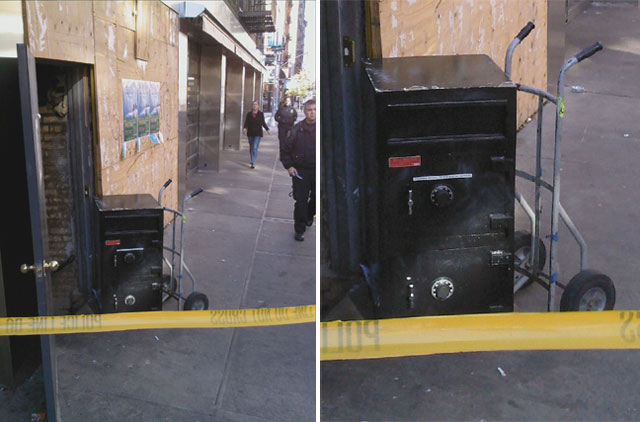 A reader tells us that the notoriously loud and trendy Delicatessen in Soho was closed this morning, sealed off with police tape, and crawling with cops. Along with the photo, he writes: "To the left of the two cops is a distraught manager-type telling me not to take pictures."

You'll recall that the clientele at the late-night eatery has so distressed the neighbors that one has taken to urinating down onto a section of glass roof, while another caused a stir last month by charging into the restaurant to dress down the staff: "People fucking live on this block!!! I can hear these people screaming outside my fucking apartment all fucking night!!!"

As for the latest dark spot on Delicatessen's record, at this point one can only speculate wildly and irresponsibly. The NYPD has no official comment, but our tipster says, "Earlier an investigator was dusting the safe for fingerprints, as the white markings on the safe will attest." When asked what was going on, an officer cryptically replied, "It should be pretty obvious." So! Rat rodeo? Tax evasion?

Sharon at Delicatessen told us to "call back in a week," for an explanation, adding that they're closed just so they can do "quite a bit of cleaning." When asked what they were cleaning, she said, "Just standard cleaning. You know, keeping it up to health code." And don't worry everyone, we're assured they'll be slinging cheeseburger spring rolls again around 1 p.m. (Another reader who just walked by said, "Everything looked normal.")

#closed
#cops
#Delicatessen
#police
Do you know the scoop? Comment below or Send us a Tip